St.Francis Day Service: The blessing of the animals 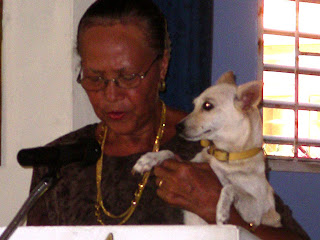 A very special service took place not so long ago at the Church of the Glorious Christ, River Road, St. Michael [Ed’s Note – WHERE WERE THE CATS – AGNOSTIC, lol?].

“Man’s best friend” and one turtle were welcomed into the church accompanied by their owners to give thanks and ask God’s blessings in celebration of Saint Francis of Assisi, the patron saint of animals which is observed by Christians every year around the world. 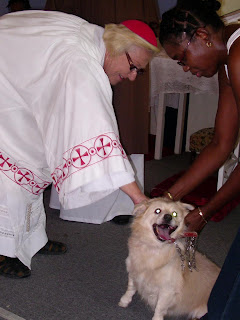 Reverend Anthony Bascombe stated as part of his welcome address, that by acknowledging the blessing of animals, we acknowledge the blessing they bring into our lives.

Pet owners and pets lined the aisle and patiently awaited Dr. Anne Rose who officiated the service, to anoint each one of the animals, whilst reciting a blessing. The names of sick animals were read aloud and prayers offered for speedy recoveries.

Cornelia Coulthrust, Founder and President of the Hope Sanctuary suggested during her speech, ways in which each of us can help to improve animal welfare, even within our own communities, by simply being observant towards each others animals. 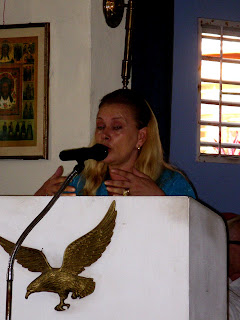 It takes only a moment to remind your neighbour to leave fresh water for the dog before heading off to work or the kindly offer of walking a dog for the elderly.

Ellen Ashby, one of the worshippers, read an especially moving prayer as she held her pet dog “Lilly” at the podium.

Hymns included All Things Bright and Beautiful and Immortal, Invisible, God only wise.

Other speakers included Dr. Latchman Kissoon and Moonesh Dharampaul who spoke of the Cow, which in the Hindu religion, represents all animals and is a sacred beast.

Dr. Kissoon, in his recitation, stated that the Caribbean seems not to recognize animals as living, sentient beings which deserve our consideration and respect. 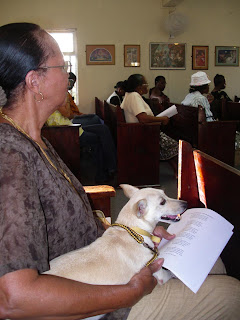 In contrast, the people of Thailand consider the elephants heroes, for the role they played in recovery efforts after a tsunami devastated the country in December 2005. He told the story of an elephant which was being ridden by a little British girl on the beach, when it sensed the approaching tsunami, changed its course and made for the hills just 15 minutes before the waves struck, thereby saving her life. Dr. Kissoon ended his talk on a humorous note by referring to the congregation as Devotees of God or D.O.G.S.

The Hope Sanctuary wishes to thank Dr. Anne Rose for allowing them to be a part of the annual St. Francis Day Service and also those who showed such compassion for animal welfare by contributing to the ceremony.