St Kitts & Nevis’ Minister of National Security the Hon. G. A. Dwyer Astaphan, responding to a recent spike in antisocial behaviour, said his government is ruling nothing out and is committed to doing whatever is necessary to reduce these acts by select elements of society.

The Minister made the statement at a briefing organized to update the public on new measures being undertaken to heighten the success of crime prevention initiatives along with plans to boost conviction rates.

?We will bring in whatever and whomever is necessary to help,? he said, noting that Government remains committed to increase the resources available to the security forces to effectively execute their duties. ?We will leave no stone unturned within the parameters of legality and righteousness to address the problem.?

St. Kitts and Nevis, much like other countries in the region, is facing an increasingly violent gang culture. Minister Astaphan revealed that he discussed the issue with a top ranking official from the Federal Bureau of Investigations (FBI) of the United States during a meeting of the FBI National Academy Associates Inc. last July.

?While speaking with the Head of the FBI National Gang Intelligence Center, Deidre Butler, she expressed deep concern that in her own country (the United States) there was such a deficiency of preventative and social arrangements in place,? said Minister Astaphan. ?[Ms. Butler] commended us on some of the initiatives we have been trying in St. Kitts and Nevis,?

Community policing is the main component being used to foster better relations between residents and the security forces. Another initiative is the ?Men at School Programme.? This includes positive male role models volunteering time to visit schools and interfacing with students, most of whom come from single-mother households or who have no strong father-figure.

Another programme dubbed ?Circle of Peace? targets the business community. Local companies and individuals are encouraged to informally adopt and mentor young people, while offering them positive experiences such as an afternoon or weekend job. This will expose young persons to a positive social and value building environment which will help to mould productive citizens. 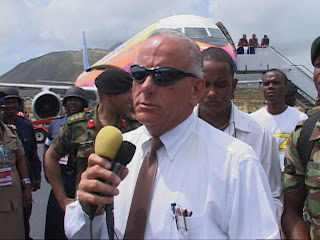 The Minister of National Security revealed that these programmes coupled with other policing and community strategies have yielded success. Statistics which reveal an overall reduction in criminal activity this year, compared to the previous year reinforce this point. Another positive indicator saw the number of illegal firearms seized by security forces increased from eight last year to 14 so far.

Minister Astaphan stressed that more efforts are needed to arrest criminal activity and called on the community and various stakeholders to remain vigilant and work closely with the security forces.

?The forces of law and order, the wishes of love and comfort of peaceful, law abiding citizens of this country will, and must prevail,? the Minister declared. ?The little pockets of disgruntled and angry and unproductive criminal elements that we have in the country must understand that they will not run this society.?

Kittitian security forces have been directed by Minister Astaphan to adopt a zero tolerance stance on loitering, persons wearing hoodies and carrying backpacks and conduct more vigorous stop and search procedures. Stringent measures will also be taken against vehicles with illegal tinting.