ROOTZ UNDERGROUND TO SURFACE AT WELCOME TO JAMROCK OVER IN JAMAICA

Rootz Underground is confirmed to perform at the highly anticipated Welcome to Jamrock concert set to take place on Friday December 21, 2007 on the grounds of the Constant Spring Football Field.

Since its start in 2005, Welcome To Jamrock, staged by BentSpeare Entertainment, has been known to feature the hottest artistes. Over the last 2 years, the Welcome to Jamrock stage has hosted such top acts as: The Marley Brothers, Sean Paul, Richie Spice, Morgan Heritage, Buju Banton, Tanya Stephens and Luciano.

The concert series has also unearthed new talent who have since made their mark on the Reggae scene. This year Rootz Underground will surface on the Welcome to Jamrock stage and claim their place amongst reggae’s elite.

Rootz Underground emerged on the scene in a blaze of high-energy performances and conscious lyrics in 2000. Though the 6-member band has only just begun digging their ‘rootz‘ in the industry, the band’s old soul has already effortlessly enlisted a core of followers stretching from Cuba, the Eastern Caribbean, Florida and California.

In 2007, Rootz took reggae music by storm with their smash hit Victims of the System which topped the Tempo Cross Caribbean Countdown for 5 weeks and earned them coveted spots on Air Jamaica Jazz & Blues and Red Stripe Reggae Sunfest.

Rupert Bent Snr. of BentSpeare Entertainment emphatically stated, “Rootz Underground’s quality of music and level of consciousness demonstrates the type of material we feature on Welcome to Jamrock.” 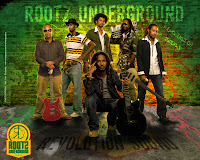 Stevie G, lead singer, Rootz Underground admitted, “We are excited about performing at Welcome to Jamrock 2007. We have been touring a lot in the last couple of months and are eager to perform to a large local crowd again“

Rootz Underground will take a break from touring to perform at Welcome to Jamrock on Friday December 21, 2007 on the grounds of the Constant Spring Football Field.