New crime trends in Barbados – Beware if on foot or behind the wheel!

If anyone from the Royal Barbados Police Force is reading this, and I know you all do, I would appreciate if you can e-mail me and let me know if the following communique is crap or truth?

Two of my friends were robbed last night (6th November 2007) in separate incidents. The first happened around 9:15 last night, the lady was on her way home traveling on Tudor Bridge Main Road (for those of you who may not know where this is the road from Eagle Hall traffic lights going to Zephrin Bakery).

She was heading in that same direction when she noticed 3 young men (as if in their teens) coming in the opposite direction. Seeing there were other people at and walking towards the bus stop in front of R.L. Seale the last thing on her mind was that they were about to rob her.

They were walking next to each other on the side walk so she stepped into the road to go around them when one also stepped into the road so she stepped back onto the side walk, that’s when reality hit her in a hard way one guy cuffed her in the face while the other grabbed her and threw her against a wall, they grabbed her bag and cell phone and ran off.

Then around 10:00 pm another female friend was in her car coming up Broad Street, she had to stop behind a car at the crossing lights by the Royal shop when all of a sudden some one shattered her passenger side glass and took her bag from the passenger seat and fled in the direction of Swan Street. 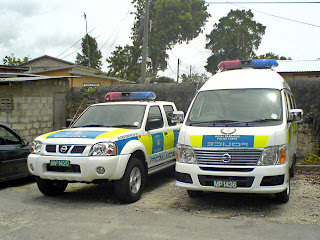 Now get this – when she went to the police station she was told that it seems to be a new trend where people are walking by cars in traffic jams, reaching into cars and stealing cell phones bags and any other thing that could be resold.

Christmas is coming up and unfortunately this will just get worse, so everyone be very careful as we never know where and when these people will strike.