KITTITIANS GET GLIMPSE OF LIFE IN CUBA VIA PHOTOGRAPHIC EXPO

An exhibition which showcased a bit of the life and culture in Cuba was well received by the nationals in St. Kitts and Nevis.

The exhibition was mounted at the National Museum on October 20th in commemoration of Cuban Culture Day. Cuban Ambassador to St. Kitts and Nevis, Her Excellency Ana Maria Gonzalez told SKNIS that she was proud to share this photo exhibition ? which has received positive reviews and won several awards in the past ? with locals. 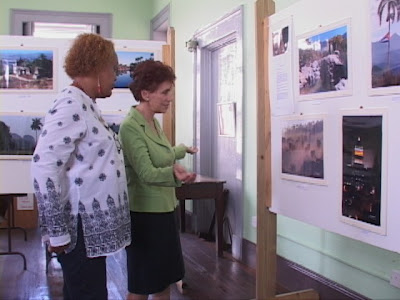 The exhibition, entitled ?Play of Light,? featured scenic photos of buildings, people and other famous sites which depict the rich heritage of the country. Most of the pictures were taken at sunrise or sunset which highlighted the artistic and creative talent of the photographer.

?I think this [exhibition] is very beautiful and that is the reason I [brought] it here to St. Kitts and Nevis,? Ambassador Gonzalez explained.

Acuna holds the F?lix Ermuza Distinction and the Replica of M?ximo G?mez’s Machete. He has earned several awards for his works. The Cuban artist has participated in 32 personal expositions in Cuba and overseas territories.

Ambassador Gonzalez reflected on the success of the exhibition, which was dismounted on the weekend, and thanked several stakeholders for their assistance. The Ministry of Tourism, Sports and Culture as well as Grace Challenger, the Director of the National Museum were singled out for their contributions.

Cuban Culture Day commemorates the day the National Anthem of the Spanish-speaking country was written on October 20, 1868. This came as result of the October 10th uprising in which the country won Independence from Spain.