Color me surprised when I got a phone call from the UK recently – it was Sara Collins wishing to give the background on why her segment appeared as it did at Absolute Caribbean Fashion! She saw the comment I left on her website and actually Googled my article on the show! 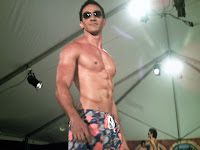 She said she was back in Barbados briefly and only had five days to cram part of her Master’s theory into a workable segment for the show which she volunteered – out of her own pocket too; the original music used in her segment was composed and engineered by Toby Armstrong and was meant to segue into a Caribbean tune as the caftan-ideals popped up along the runway, but there was not enough time to add that part, in her words –

The Absolute Caribbean Fashion Show is portraying “Caribbean Fashion” to Barbadians, Caribbean people and to the world! We are Caribbean people, we have so much to offer yet we allow ourselves to become imitators through outside influences and our history. We have allowed to ourselves to spiral into a cultural identity problem. It?s time, though, to wake up, believe in each other and walk hand in hand towards our culture rather than away from it!

Now, I had this wonderful idea – after all the designers have showcased their collections that just before the show closes to present my message:

Think pounding music, 5 Caribbean (if Barbadian even better!) models walking down the run way wrapped in complete plastic wrap, they stop in the middle of the stage, two children run out and start ripping the plastic off of the front model, she frees herself (awakens), she is dressed in a beautiful Caribbean silk caftan with all our natural resources printed on it, suddenly the message appears in the back 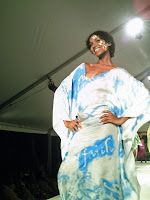 “Don’t be imitators, be INITIATORS!“, she starts to unravel the rest, they too are dressed in amazing caftans portraying our resources, they leave the stage, message changes to “Don’t imitate, INITIATE!“.

What does the plastic portray? The influences (history, Western world, technology) that stop us from accepting ourselves and what we offer as Caribbean people!

What do the children portray? We may not be able to completely turn into initiators but our children can, the future can!

What do the caftans portray? Our resources, our designers, our creations, our fashion, our culture!

What does the message portray? Wake up, we are special, we are Caribbean Class! 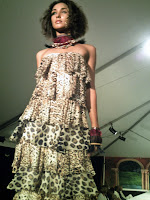 This last part according to Sara is very important, she feels all of the hues of the diaspora of this Caribbean prism should NOT seek to be WORLD class, rather set a new standard and achieve CARIBBEAN class, as a standard of new excellence in and of itself!

Sara told the Bajan Reporter she does not want to be limited to perceptions of being regarded as either a model or a designer of clothes, but seen instead as a designer of CONCEPTS!