For the majority of Saturday evening, Iron Sharpen Iron, was one of the quality main events for 2007 at the near year old Limelight Cafe (the website needs updating badly now) at Cavans Lane.

There were some askew moments, but nothing to do with the Bajan word-warriors Adrian “Amenyama” Green and Dempstu “DJ” Simmons – aka – Qui-Gon Jinn & young Ben Obi-Wan Kenobe (respectively), so with that being the case let’s get those lowlights out of the way so as to concentrate on the positives! 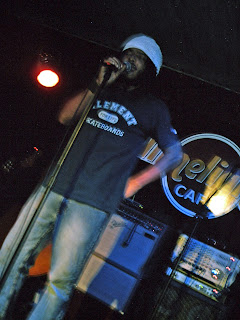 Amenyama? I am sorry, but I cannot agree with your view on Red Star Lion, he is not yet a top notch reggae singer – his own identity is key, imitating Ziggy or Kymani Marley does not a star make. As for the Caribbean scatting at the end of his selection, it is reminiscent of animals not humans and we are stronger than that!

Next thing, that emcee who never identified himself but everything was excellent for the fellow, I think if he stubbed his toe that night? He’d’ve hollered “EXCELLENT” instead of “expletive“, my man sharpen thine own iron and open your vocabulary. 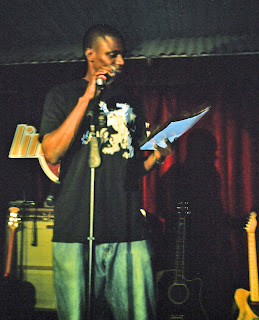 I en’t done yet, he also referred to Le Mot Juste (LAY, MOW, ZHUICE) as LER MOTT JUICED, this slam was not sponsored by Mott’s Juice nor was Star Trek: The Next Generation‘s Mot The Barber involved – if in doubt? Avoid or ask about, querying does not betray ignorance it shows a thirst for knowledge and desire to get it right the first time!

Patrons need to respect other patrons especially pregnant folks who get thirsty and hungrier than the regular crowd, many audience members would not make way for waitresses trying to pass between the balcony and the main area where the performances unfolded. As a result, in one case I am aware of; the woman never even saw a menu far less got a glass of iced water! Not good – either for selfish participants, or for non-assertivity by staff in achieving ultimate customer satisfaction.

Kite‘s appearance that night was not quite the usual standard you expect from them – JJ had his usual tongue-in-cheek quiet sarcasm ready when he had to try and negotiate the stage in the dark before stage lights were up and claimed he loved running an obstacle course! 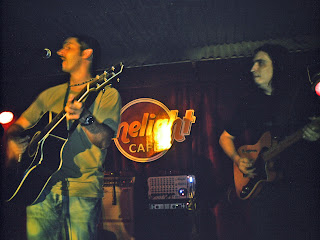 I dunno if this set JJ off in the sense that when they did their live version of Beautiful Sky, his voice was not the usual tenor but almost strident in a snarly way; then when Kite assayed Breaking Up (a tale of dissolution in the midst of left-footed chaos) Brian did not use the beautiful riff as appeared in the cd-version of the track. 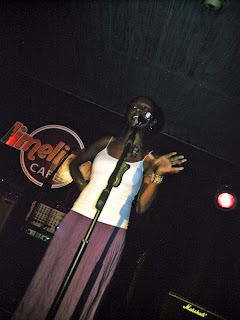 Model and activist, our pal Alyson Holder, now at the Advocate, also had her debut in singing that night- her engineer should be sent to a refresher, maybe he felt he was being kind as she just began but the voice level was set too low for her range and the guitar work from Garvie was too damn overpowering! Nevertheless, her original tune was very welcome and her tones reminded me of a Bajan Alanis Morrissette!

Ok, Bajan Reporter, ya done yet? Anything GOOD happen? Well, I didn’t get proper video – the audio was too distorted, but the picture was clear… Ya beginning to sound like regular News now… Um, as I said before – plenty good happened Saturday night! 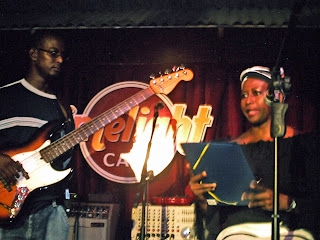 Louisa Nurse from the Voices: Barbados Writers Collective made a semi-impromptu poem based on the concept of the show but her real show-stopper was Death Lives which implied Death was an entity in partnership with Lucifer to urge the ZR community to do bare idiocy on Barbadian roads! It was well punctuated by bassist Richard Evans! 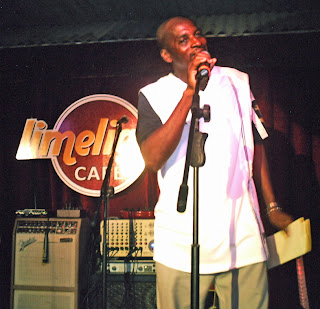 Peter Bowen, the love man, stunned the crowd with his poem of adoration – “I wanna be your wheelchair for your crippled emotions“ 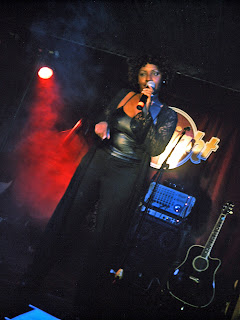 Sandra Sealy did an extended version of her “Beauty of The Bald Head” and used a living prop (her hubby) to emphasise her appreciation of a naked scalp. It was a good thing the event started at six, as it did not end until nearly midnight! From the group NexCyx was Rochelle and Mahalia – where Mahalia who is usually the lead singer composed a tune for Rochelle to do lead instead, their interaction reminded me of Zhane the erstwhile R&B girl duo of the late 90’s in the US. 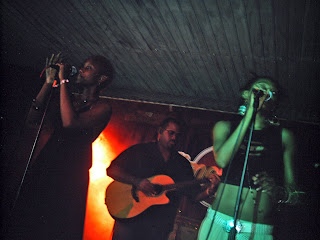 Their guitarist, Russell Padmore, who is also party of NexCyx – did some sweet and intricate fretwork that brought to mind Mason Williams of Classical Gas fame in 1968. 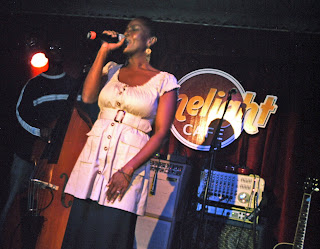 Carol George told of the African Warrior Queen Nzinga who resisted Europeans the same way Boadicea resisted Romans in Britain before it was known as that. Again, Richard Evans did fantastic bass-work an this time on an actual cello which he had resonating like an African drum in cadence and tone!

Garvie, just back from a serious bout of dengue, gave the audience “Trying To Get By” a tale of boozing and pals, content-wise; rather like Mary Hopkins’ “Those Were The Days” while Billy Kincaid was in full energy with his live rendition of “Champions” featuring Barry Chandler and then they played the track he did with Kite – I was surprised, I thought the guys would do that live together? 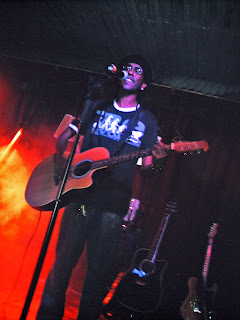 Then finally they drew the big irons and folks were not disappointed! Adrian Green relayed his now honed and improved Rebel Diva (which was newborn back in July) as DJ Simmons now had a response for the AIDS-cautionary “Nah, bwoy – dah cyan happen tuh me“

His new addition spoke of Hope, Prayer, not hating but only loving yourself and using the situation to learn who your true friends really are – as in those that stay even though they know you could be HIV+ 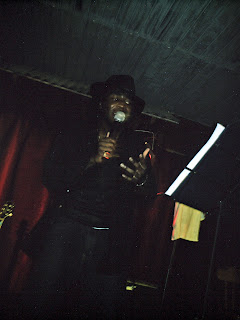 DJ probably wears black or dark shades for two reasons – one as an affectation and the other as a complement to his poem urging folk to stop thinking of Black as a negative as in Fri. 13th but as a positive as in accounts or in Karate. But you know what? Black is not camera friendly!

Adrian Green’s outfit was more conducive to the evening’s photo ops, but too far left can be right – if lights were too bright then his gear would burn the lens! But his words and rythms and deeds burned the brains and ears of the crowd that night for sure! 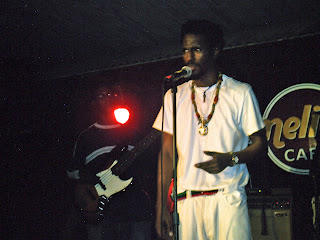 He made new words like “scareful” as opposed to careful or caution; create phrases like Heart-BOOM not heartbeat… But Adrian was in amazing form that night at Limelight when he did a parody of “I En’t Diggin’ Nutten” – it was made into “I En’t Singin’ Nutten” which is Amenyama’s view of the content of most songs of Crop Over for at least the last two years!

He had a call and response with the crowd that had them leaping from their seats, begging him to record the song for Kadooment next year! Adrian uses a speech-cadence and a rythm-style that is all his very own! 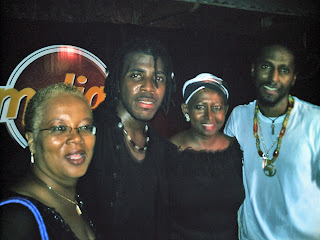 As we keep reminding you, Prince observed that even swell parties have a conclusion and when there was an end to the festivities the crowd just rushed the stage and congratulated all and sundry for a burst (place was packed to capacity) performance!