Barbadian Retailers deny price gouging, so why do some overseas products have dust on them?

The last few weeks have almost been a virtual referendum on the cost of living in relation to basic staples for eating and drinking – such as milk, flour, meat, vegetables, cooking oil, and other products which some list at ten, yet others feel there are more than just ten…

How can anyone in their right mind say there is nothing going on with the rate of purchase power in ratio to escalating crude oil prices? Does anyone recall the print edition of the Nation this week where some basic goods were set in a basket (not a large or medium trolley mind you, but a little wire framed basket) and it came to $76.71? WTR? Who is the foolbert – us or pricing mechanisms we allow? In Italy, recently when confronted with expensive Italian pasta, householders banned their own product until measures were established to stem rising costs! Yet certain parts of Government would have you think there can be no room for cost controls –

Barbados’ Central Bank governor Dr Marion Williams is not in favour of adopting any measures to control high prices.

Fielding questions from journalists on Prime Minister Owen Arthur’s six-point plan to tackle the high cost of living, including a tough anti-price-gouging law based on the United States model, Williams said she preferred not to comment on matters discussed at party conferences.

But when responding to the suggestion that the Central Bank was on record as not wanting to go back to price-control or selective credit-control policies, she described them as not being efficient and gave way to Deputy Governor Carlos Holder for further explanation. In his assessment, he agreed with Williams that they were inefficient.

That was from Jamaica’s Observer online edition, here is where we touch closer to home, this is from Channel Eight –

Director General of the Barbados Consumer Research Organisation, Malcolm Gibbs-Taitt is calling for government, business and consumer organisations to sit down and come up urgently with an answer to spiraling prices in Barbados.

He made the comments on this weekend’s news and current affairs programme “The Peoples Business’ which examines the issue of price gouging.

Former General Secretary of the National Union of Public Workers, Joseph Goddard believes that there’s not much justification for the increases in prices seen in Barbados.

Also appearing on the programme is President of the Barbados Chamber of Commerce, Dick Stoute who says the element of trust is lacking between consumers and businessmen in this country.

Now I am glad that the matter of trust is brought into the fold, there are always denials of hoarding products so as to falsely boost prices here, right? But I couldn’t help but realise that one of my favorite types of morning beverage was AWOL for a good bit! I used all other substitutes, some even better tasting but more expensive, and still my top notch brand was MIA (not any motley word, rather an abbreviation implying parting is such sweet sorrow)!

Lo, and behold… In the middle of all this price-war idiocy, what appears to my wondering eyes? [LOOK CAREFULLY AT THE PHOTOS, IF NEED BE – CLICK ON THEM AND LOOK AT THEM FULL-SIZED! THERE ARE SOME COVERS ON THE PRODUCT LAID ON THEM SHELVES WHICH SEEM TO HAVE A FINE COATING OF POWDER OR DUST… EITHER IT’S ANTHRAX, OR THEY WERE NOT CLEANED OFF PROPERLY! BUT DOESN’T IT IMPLY A GREAT PERIOD OF NIL ACTIVITY TO DRAW SUCH DUST EVEN AT THAT LEVEL?] 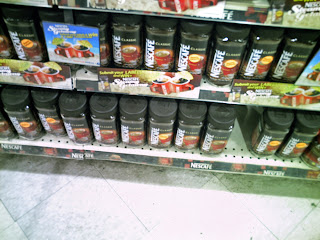 Not only is it back, but there is DUST on the covers, as in LOOOOONG storage? But I must be acting cynical, right? Retailers would never HOARD a product to make it 3 to 5 dollars more than what I’m accustomed to shelling out for, RIIIIIGHT????

Well, it seems that Government here is thinking along similar lines, in essence? SOMEBODY has to be redirecting costs for a profit to fall in a particular direction, here’s an excerpt of what the PM believes –

“There have been legitimate concerns expressed over the past two years about the rising cost of living in Barbados,” {Owen Arthur} said, “with rates of inflation varying between six and seven per cent.

“It is also a matter of great concern that the main areas of increase have been basic food items, personal care products and construction materials ? all commodities used by a broad cross-section of the consuming public.”

Arthur said the Ministry of Commerce and Consumer Affairs had stepped up its price monitoring capability, but it had not met with “full or enthusiastic support from the distributive trades . . . .“

“It points to an element of price-gouging and some collusive behaviour on the part of major suppliers,” he added.

So much so, Senator Lynette Eastmond held a closed-door session with elements of the consumer-mercantile community recently and to hammer out an equitable accord. 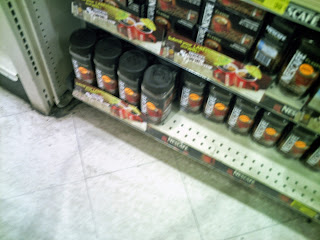 How fair will the meeting be, if there is no one verifying what stock is or is NOT being distributed for whatever reason? Somebody has to watch the watchmen, ad infinitum or ad nauseam!