Plans for their ?Best of Barbados Gone Madd? comedy show scheduled for the Gymnasium on 25th November were revealed to the sponsors and well wishers who attended.

In addition Madd’s Greatest Hits part two compact disc which is being released to commemorate the 25th Anniversary was also launched at the event. 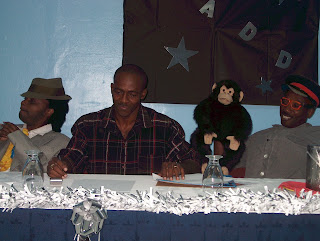 The entire media launch proceedings was chaired by Peter Boyce, along with characters P.C Broomes and Bruggadown in full costume, plus monkey character ?St Clair? made an impact appearance.

Madd looks forward to entertaining the public on their 25th anniversary edition of Best of Barbados Gone Madd on 25th November 2007 .

Madd also invites members of the public to attend the Sons of God apostolic Church in Ealing Grove, Christ Church for a special service to give thanks for their 25th year of existence this Sunday 18th November 2007.