For the second time in as many days, Barbados’ Ministry of Health ordered a recall of food products originating from the US. At first, there was an E. Coli scare on the meat used in Totino’s & Jeno’s pizzas, especially their pepperoni versions. Now, it is not limited to beef and involves several varieties of frozen pot pies after the voluntary recall of these foods in the United States by ConAgra Foods of Marshall, Missouri.

The following brands and all varieties of frozen pot pie products, including chicken, turkey and beef, are subject to this recall:

These frozen pot pies include all varieties in 7 oz. single serving packages bearing an establishment number P-9 or ?EST. 1059?, printed on the side of the package.

Barbados’ Ministry of Health advises persons in possession of these products, with the above brand names and product codes, to refrain from using them and to return them to the point of sale.

These frozen pot pies may be linked to an outbreak of salmonellosis in several states in the U.S.A. and were also distributed to retail outlets in the Caribbean.

Persons who are immuno-compromised or on chemotherapy As well as children are particularly susceptible to foodborne illnesses.

Salmonellosis is one of the most common bacterial foodborne illnesses. Salmonella infections can be life threatening. The most common symptoms of salmonellosis are diarrhoea, abdominal cramps and fever within 8 to 72 hours after infection. Additional symptoms include chills, headache, nausea and vomiting that can last up to 7 days. Persons who are ill with any of these symptoms and have consumed any of these frozen pot pies should seek medical attention immediately.

The Ministry of Health here pointed out the local agent; SBI Distributors is cooperating to ensure that only products which are safe are offered to the public.

Meanwhile, the Ministry?s Environmental Health Officers are again checking distribution points and retail outlets to make sure that all recalled products are removed from their shelves.

Government’s Health arm is advising persons in possession of these products, with the aforementioned brand names and product codes, to refrain from using them and return them to their original point of sale immediately.

These frozen pot pies may be linked to an outbreak of salmonellosis in several states in the U.S.A. and were also distributed to retail outlets in the Caribbean. 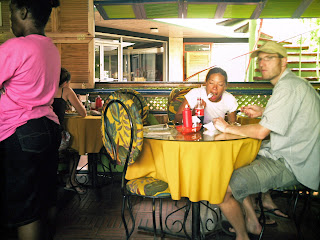 Now you know why many folk are not only particular about food, but tend to stick with Caribbean staples. Many Barbadians are accustomed to head out to Sheraton and sample the fare at IV de People Deli – Guyanese and Trinidadian fare… Buss-Up Shot, Doubles, Roti and more!

Still others, with a good few expats scattered betwixt here and there, like to mosey on over to Bay Street for the Indian Grill and their fine array of rotis – saltfish & okra; liver & gizzards; shrimp; pork; beef and channa varieties (every now and again, they get shark and bake from Trinidad & Tobago – it’s very nice)…

But the place that seems to be really catching on these days is a slice of Jamaica, called Kingston 10 at the same Pandora’s Plaza on Bay Street! This is what the Jamaican Gleaner had to say about the slice of home away from home –

{Owner Kamau Ikechi} said, “I want everyone to know that if you visit Barbados, there’s a piece of Jamaica here. Good food. Great company. I even have Appleton and J. Wray & Nephew White Overproof but no Red Stripe. Sadly, no Red Stripe. Barbados no longer has a distributor. It’s the best beer and my people keep asking me to bring out de beer and I can’t. The rum is there, the food ready. All we need is Red Stripe.”

As Kamau finished this sentence, Beenie Man’s song could be heard in the background: “Give me di ting dat de doctah order me.” Nuff said. 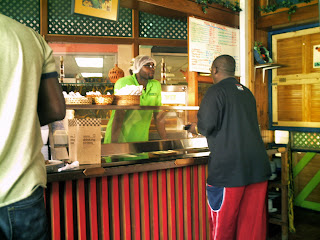 For myself, I adore their patties, big and full of MEAT, not like Bajan ones which are the total opposite! They are full of dough with beef essence as an afterthought, but Kingston 10’s patties are hard to come by again – unfortunately!

I have had oxtail and ground provisions at the little eatery, and just yesterday I tried their ackee & saltfish (Jamaica’s ackee is not what Bajans think of as ackee – Trinis and Jamaicans call “ginnup” what we think of as ackee) with white rice and some fry plantain, washed down with Ting their aerated grapefruit beverage that used to be distributed by Banks years ago!

Now ‘Saturrduh‘ is pudding and souse day for every Bajan worth his salt in pork. I nosily enquired and was answered: “We love to try out foods from other Caribbean islands and so we are here.” How did you know about the food? “I came here yesterday for the same lunch,” said one, and with that the lot burst into hearty laughter.

I moved right along to the next table where another Kingstonian, Marie Richards, had this to say: “I love it here. This is as close to anything Jamaican I can get. I came to Barbados about 18 months ago to work. This is great.”

Miss Baje in yellow at the previous table, not to be outdone, piped up sharply, a stern look on her face: “But wait. Come here. I am a little upset now. Yu didn’t ask us what we thought of the food, you just asked one question, that’s all.” Expecting the worse from Madame Feisty, whose name I later found out was Patricia, I walked back to her group with many apologies. In as soft a voice as I could muster, I looked directly at her: “So how did you all enjoy the Jamaica food?”

“It was excellent,” said my tormentor, bringing more peals of laughter from the lot.

So stay healthy and dodge the dreaded E Coli and Salmonellosis by sticking to good Caribbean food like in Kingston 10 on Bay Street, situated on the side with the sea [no ocean view though] about a mile and a half from Bridgetown, the capital!