TS Pelican, a 150 foot square rigger, sails into the deep water harbour in Bridgetown today! She is expected to remain in Barbados for up to a week before setting sail again with her crew of trainees. From 16 December – 16 March she will be available to charter for adventure holidays. All money raised from various charters is ploughed back into the Sail Training project. 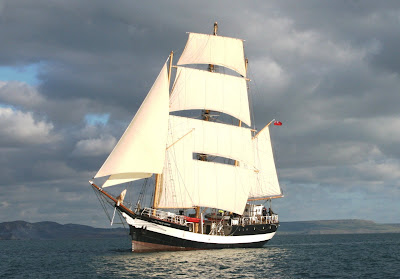 The square rigger departed Weymouth on her maiden voyage to the Caribbean as a Sail Training Ship on 25th September. En route she was involved in a dramatic rescue off the coast of West Africa. Thanks to her prompt action, alerting rescue services in Tenerife, the lives of 129 refugees in a sinking ship were saved.

The founder and co-owner of the ship is 72 year old, Graham Neilson who joined the Navy aged 13. He found an old 1946 Arctic trawler in 1995 and has worked with a team of enthusiasts to turn it into this unique and very elegant clipper, with rigging inspired by the Barbary Coast Pirate ships.