UK HOPES TO IMPROVE STANDARDS OF PRISON SERVICES IN THE CARIBBEAN

The Caribbean has been assured of Britain’s continuing help to train future leaders for the region’s penal institutions.

That pledge has come from the Deputy British High Commissioner, Alan Drury, who was addressing regional prison officers gathered in Barbados for a week-long training programme that is targeting personnel with the potential to reach the rank of Superintendent of Prisons in five to ten years.

He spoke of the UK Government’s Caribbean Prison Development programme which has been running for six years, and explained how the UK places strong emphasis on continued human resource development in prison systems. The current course, he said, was one such example of that commitment to the region. In addition to training, the programme also includes mentoring and support in individual prison establishments.

Also addressing the officers was Superintendent of Prisons in Barbados, Lt Colonel John Nurse. The prison boss encouraged participants to “?embrace and lead the new philosophies in corrections and prison management.“

He went on to stress the importance of ethical behaviour: “We expect from you honesty, integrity and most of all loyalty in the discharge of your duties. You have the opportunity now to display your true potential on the long road of development. Do not take your opportunities for granted.“

The 19 officers from 14 countries and territories were privileged to be amongst the first to be invited to tour the new prison at HMP Dodds in St Philip, where they were able to cast professional eyes over the new facility.

The training programme is being conducted by UK Foreign and Commonwealth Office Prison Adviser, Nick Brooke, and Graham Autrey, UK Prison Training Consultant. They are being assisted by a regional trainer, Jeffrey Edmund from the Commonwealth of Dominica Prison Service. The course ends tomorrow Friday 5th October. 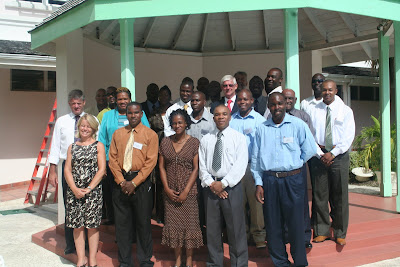 The regional prison officers and their trainers after one of their sessions during the week-long course.