Blue ?yster Cult is an American rock band formed in 1967 and still active in 2007. The group is probably best known for three songs: The 1976 single “(Don’t Fear) The Reaper” from the album Agents of Fortune, the 1981 single “Burnin’ for You” from the album Fire of Unknown Origin, and “Godzilla” (1977) from Spectres. The band has sold over 14 million albums worldwide. 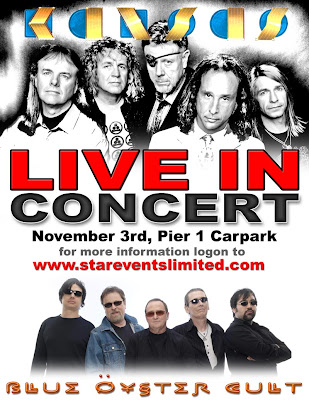 Kansas is an American progressive rock band who became a popular arena rock group in the 1970s, with hit singles such as “Carry On Wayward Son” and “Dust in the Wind.” Kansas has remained a classic rock radio staple and a popular touring act in North America and Europe.

Now, both bands are prepared to melt down Port Of Spain early next month thanks to Star Events!