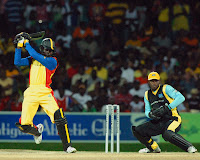 Both players suffered injuries to their knees while training in Antigua with the Pro Team and will most likely require surgery in order to return to full fitness and resume full preparation for regional cricket and the Stanford 20/20 Tournament in January and February next year.

All expenses, including air fare and accommodation in addition to the medical expenses will be borne by Stanford 20/20.

?Though these unlucky injuries fell on two key players, this is the manner in which we will be taking care of members on the Pro Teams,? Sir Allen Stanford also stated; ?Injuries are unwanted but sometimes unavoidable part of professional sport. We recognize this and we have put measures in place to ensure that whenever a player is injured he receives the best medical attention so that he can return to full playing fitness as quickly as possible.?

?As a player it is always frustrating when you get injured but I am happy that we are able to get such high quality medical care in order to ensure that we return to playing cricket,? said Richards, who played a solitary One Day International for the West Indies this year.

?It is really great to know that we are able to get the treatment required at no cost to us because Stanford 20/20 is taking care of everything, that helps to ease the frustration,? Cornwall added.

Sir Allen also called and spoke with both of the players before they departed on Friday wishing them a speedy recovery and assured them that he was committed to making certain they had the best care always and to let them know how proud he was that they were part of the Stanford 20/20 Pro team in Antigua & Barbuda.

The unfortunate injuries have caused both players to miss the ongoing regional KFC Cup One Day Tournaments but once the surgery is completed their recovery should be about 6 weeks and more than likely less.

The players will spend one week in Miami during which time they will undergo medical tests and the expected surgery before returning home for a period of rehabilitation with local doctors and physiotherapists.