IN ST KITTS – A police escort led a mini-motorcade through the streets of Basseterre over the weekend as the returning Special Olympics team, parents and well-wishers celebrated. 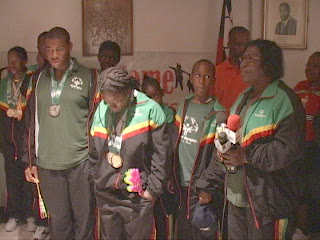 The group was on its way to the Bird Rock Beach Hotel where a reception was arranged by the Ministry of Tourism, Sports and Culture to honour the accomplishments of the special athletes who won five gold, five silver and five bronze medals at the World Summer Games held in Shanghai, China. 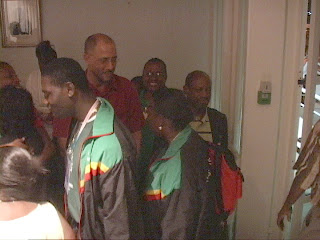 Minutes before the motorcade, a brief welcome ceremony was held at the VIP Lounge of the R. L. Bradshaw International Airport for the returning champions, who were greeted by members of both the private and public sectors of St Kitts, apart from regular citizens.

Prime Minister Denzil Douglas recounted his address to the team before they left, noting given past performances expectations were set extremely high. He said that the athletes delivered yet again.

?I am feeling extremely proud as the Prime Minister of this country to welcome them and to say congratulations for their achievement on this occasion,? he said. ?Every time that the St. Kitts and Nevis flag was raised when you took that podium and you were saluted by the entire world for winning your particular [event] that was a signal to the world that St. Kitts and Nevis was ready and coming and they better look out for us in the future.?

Prime Minister Douglas said that the special athletes have once again placed St. Kitts and Nevis on the international map and noted that everyone should be proud of them. He thanked the National Director of Special Olympics Clarice Cotton, the coaches, volunteers and sponsors that worked with the team and prepared them for competition. 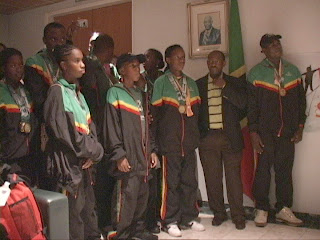 The Prime Minister also outlined his government?s commitment to continue placing social development and youth-related policies at the fore front. 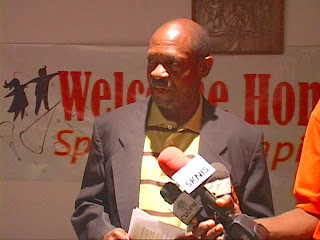 The Kittitian leader concluded by raising a toast to the champion team, which marked the start to the three hour celebration which moved to the Bird Rock Beach Hotel.

Chairman Lloyd Lazar thanked the hotel for its contribution in holding the reception and hosting the Nevisian contingent overnight.