Curefest kicked off with a bang Friday 12th October at the Starfish Resort in Trelawny with its first show Reflections, which is the first of three shows to be held in Western Jamaica in the series.

The show observes the October 11th birthday of Jah Cure. The party had an intimate setting where fans and media were able to mingle with Jah Cure and family and also got the opportunity to get their pictures taken with him.

The live entertainment commenced with Live Wyaa who did a rendition of popular reggae and dancehall hits interspersed with melodious reggae jamming instrumentals. Etana then took the stage and gave a set which would rival any international reggae superstar. After her performance, Etana returned to the stage to sing happy birthday to Jah Cure before he cut the large birthday cake with his mother Pansetta Campbell. 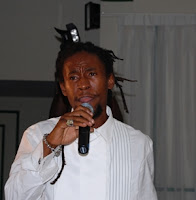 It was at this time that Jah Cure succumbed to the pleas of the crowd and began singing Longing For along backed by the audience. It was an emotional performance filled with gratitude. Jah Cure was then joined on stage by Prodigal Son who sang the Last Verse of Longing For with him. Prodigal then did a full set belting out some of his more popular hits .

The show was closed off with the sweet sound of Karen Smith who did not disappoint. She sang some of her most popular songs and some familiar covers.

Reflections was a success and the patrons left feeling content. Yesterday was the 45 Cures show held at Pier 1 in Montego Bay, it featured a DJ Spin Off between top radio and sound System DJs.

The final show will be tonight at the Trelawny Multi-Purpose Stadium this Sunday October 14th, it’s dubbed the Longing For concert. It will feature one of Jamaica’s top reggae and dancehall artists – the man himself, Jah Cure.