Hit For Six! Goes To Hollywood: the only Caribbean film at American Black Film Festival in Hollywood

Blue Waters Productions’ movie Hit For Six! will be shown in the American Black Film Festival in Hollywood which takes place Oct. 25 to 29, 2007.

Writer-director-executive producer of Hit For Six! Alison Saunders-Franklyn, said the movie will make its international premiere as an Official Selection of the prestigious American Black Film Festival in Hollywood, Los Angeles and is the only Caribbean film on show this year.

The American Black Film Festival (ABFF), now in its 11th year, has been described as the premier marketplace for new films by and about persons of African descent.

?We are very excited about being selected for this festival which has attracted over the years the cr?me de la cr?me of the Black film industry. We see it as an opportunity to promote the film in the international arena and to showcase Barbadian and Caribbean culture on the world stage?, Saunders-Franklyn said.

?The American Black Film Festival is strategically positioned two days before the American Film Market (AFM) and is also in LA,? Saunders-Franklyn noted, adding that her company, Blue Waters Productions, was working towards being represented there as well. The AFM is one of the largest film markets in the world and attracts buyers and sellers from 70 countries.

?Making and distributing this film has been very challenging but we are driven by the desire to tell one of our own stories and build a local industry. These opportunities encourage us to keep going,? she added.

ABFF is sponsored by major entertainment companies such as HBO, BETJ, Fox Entertainment among other corporate entities.

Following its world premiere in Barbados in April Hit For Six! won three awards at the Bridgetown Film Festival 2007 and then had a local run of five weeks at Olympus Theatres. The film has secured Caribbean-wide theatrical distribution deals for 14 countries through Palace Amusements of Jamaica and Trinidad-based Goldmine Entertainment.

?We also have a number of other plans in the works for international distribution,? Saunders-Franklyn remarked. The Barbadian cricket film, inspired in part by Lagaan, is also slated for viewing in Castries by October 19 and in St Vincent by October 24. 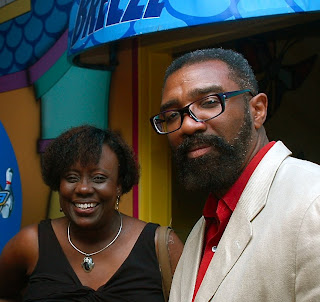 Writer-director-executive producer of Hit For Six! Alison Saunders-Franklyn with St. Kitts-born producer of the Hollywood film ?Hurricane?, Rudy Langlais, at a screening following a workshop at the Trinidad and Tobago Film Festival.

Hit For Six! is the story of a playboy West Indies cricketer who must fight the demons of his past, including a match fixing charge. He learns about love while struggling for his last chance to play in a major global tournament and earn the respect of his estranged father, a former great West Indies player.