Got more News on those Arawak Games played in the memory of Ernest C. Simon as coordinated by Damon Corrie –

The Pakuri Arawak Territory girls football match – apart from being the first football match ever played by ladies on Pakuri had a very special International observer who happened to be in the village on one of [Damon’s] eco-tours [while] at the same time watching the game – Mr. Hans-Werner Auer from Germany, former player for the Bayern Munich football Team in the Bundesliga (German League). Also – the Caucasian fellow in the group shot of the winning Men’s Football Team is Brian Grillow of the USA, a Peace Corps volunteer presently stationed in the village who played well in the match in a defender role.

The first exposure to international football players that ever occurred on Pakuri Arawak Territory was in the Summer of 2002 when I organised a match between the then visiting Queen’s Royal College Scout Troop of Trinidad and Tobago under Scout Leader Roger Berkeley (who were all on [Damon’s] eco-tours) – two of the QRC Scouts were players on the Trinidad under 17 team, yet the Pakuri Arawak boys won the match 3-1. The following day the Pakuri Arawaks won the cricket match as well. 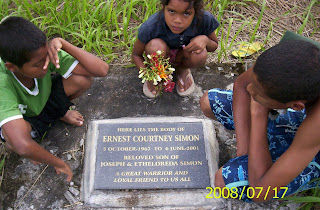 3 of Damon Corrie’s 4 children on Pakuri Arawak Territory in Guyana paying their respects at their uncle (mother’s brother) Ernest Courtney Simon’s (whom the 2007 Sports Festival was held in honour of) graveside. At right is Hatuey Corrie (14) student of Christ Church Foundation School, centre is Sabantho Corrie (9) student of St. Angela’s, and at left is Tecumseh Corrie (12) Student of the Combermere Secondary School – all in Barbados.