I am about to propose a stance over music/films/etc. that many an intellectual property owner will foam at the mouth over – if the cost of the original master copy of your product is so high – then ppl will continue to bootleg, make it cheap from the outset and you will cut the legs out from under bootleggers! “But my work is worth, etc.” True, but which is easier, a thousand tix at a dollar each? Or one ticket at a thousand bucks? To reiterate – If the master version is inexpensive from the get-go, then what chance does that leave a bootlegger? 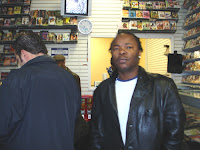 December 27, 2006 – 6:00 PM In front of 1118 Flatbush Ave in Brooklyn stood Richard Urbain, of Venus International in front of the African store named NAFA, the same African store OpaMizik.com reported over a month ago that was making a killing selling Haitian bootleg CDs. when I called Richard to find out what was going on he then told me he was told that the store had already had his product, the Richie & Gracia cd that he just released on stock and it was being sold for $2.50 a piece.

Upon my arrival to the store, there stood the owner, his wife and a worker. The police were already on the spot and they were telling Richard Urbain to identify his products and to prove if they were really his. Then came Geronimo of Geronimo Records with his papers proving he is the rightful owner of all of his products which turned out to be 350 items ranging from audio CDs to movie dvds. 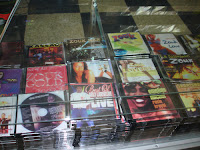 Robenson of Boogie productions, Phillip Lavlanet of Antilles Mizik, and Alex Abellard for Hit Music Factory and Alabel Mizik were all there within an hour. The guys were asked by the police to identify all of their products and when they presented the proofs that they were indeed the rightful owners, the alleged bootlegger/store owner was then placed under arrest. 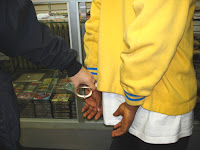 While having his rights read to him, I asked him if he had any comment.. he stated to me “It’s a business… everybody is doing and Haitians are not copyrighting their products anyway.”

As he stood there in handcuffs, another one of the owners stated to the cops that Alex Abellard and Richie Urbain sold the products to him only to retract his statement when Alex asked him to look at the cd clearly and tell him if he indeed sold them to him. 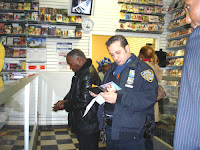 The guy was later taken to the 70th precinct, the same precinct Abner Louima was sodomized 9 years ago that faithful night coming from the night club called Rendezvous. The cop took a total of 10 big garbage bag filled with products. Keep in mind the products taken where only those their rightful owners claimed.

Some other products that went unclaimed were; 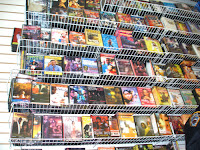 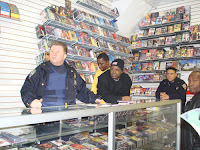 The guy had more cds in his store than most Haitian record stores have in their stocks. Although the owner was arrested the store was not shut down. According to officer Mastrokostas of the 70 pct, the producer are going to have to each sue the owner of the store in civil court. “It’s an ongoing effort if they really want to shut down these stores.”- Mastrokostas 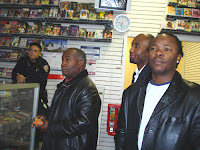 OpaMizik.com also went to the other location we reported to you before located on Church ave who is also owned by the same African man however somebody must have alerted them because when we got there they were closed.

At the precinct Opa Mizik spoke with Phillip Lavlanet, Alex Abellard and Richard Urbain and you’ll be able to hear the audio interview soon.

How the operation went down;

According to Richard Urbain, he spoke with Theo Michel Theodat alerted him of his product being sold and he decided to go see for himself. When he got there he saw a few Haitian customers buying his CDs. He told the owner that they were his CDs and when he goes back to the store the following day if his CDs where still there he would alert the police. Of course that’s not what he did. Richard then went out side and flagged a cop down and explained the whole situation to him. The cop called his partner and within the next hour, a police van was at the location to collect the items. 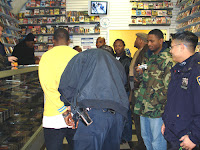 During the whole ordeal, some customers who had gathered out side was inquiring what was going on. Some admit they have purchased cds from him while others claimed they didn’t know they were real Haitian CD stores in the area and that’s why they bought from him.

I just spoke with Richard and he told me he is going back to the precinct to give a statement.