Ok, so Rihanna has decided to remember her home roots and went to a wedding recently, so yes, it is therefore natural at such an event with many photographers, that someone will get lucky and grab a shot of the famous Fenty lass. 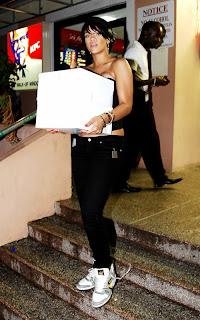 But to track the gal when she is going down the steps outside KFC by Sheraton Mall (check the link, they brag about the candid camera stunt) – anyhow, them didn’t look like snack-boxes, those seemed more like she stopped at Pizza Man Doc! Even so, to me, that’s a bit much; but the folks at Gossip Girls don’t think so –

Ever since her surge to the top of the charts, Rihanna has had little time to sit down and and take a break from it all.

But the Umbrella singer is doing just that, as she recently decided to spend a few days back home in Barbados for a friend?s wedding. 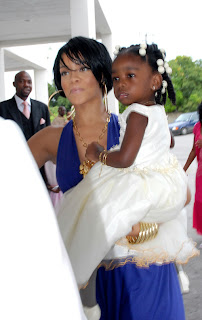 The 19-year-old beauty made the trip on Wednesday, the day after her House of Blues show in Los Angeles. On October 30th, Rihanna returns to the stage for a lone show in San Jose, followed by two weeks off to prepare for a lengthy European tour beginning on the 11th of November.

In news relating to Rihanna?s personal life, Josh Hartnett recently spoke to press about his lip-locking session with the Good Girl Gone Bad.

While on Fox?s Morning Show with Mike and Juliet, Josh was asked about all of the relationship talk surrounding himself and Rihanna.

?If I start responding to these things, then everyone would want a response about everything,? he said, adding, ?But it?s ridiculous. And half – 95% – of what is written about me is not true.?

As if that wasn’t enough, a Brit entertainer figures as Josh Hartnett is not interested in Rihanna, then he himself stands a chance to woo the gal! Anyone ever hear of Zedstar? I wonder what Jay-Z makes of all of this, though? Remember, he’s supposed to screen possible pals –

It seems to be the fad of the last few weeks for some handsome guys to approach Rihanna – the wonderful Barbadian popstar.

After the actor Josh Hartnett, who recently confessed during a Fox’s morning show that there wasn’t a relationship with the singer, Zedstar is hoping this is the time for him to have chance at exchanging cell-numbers. 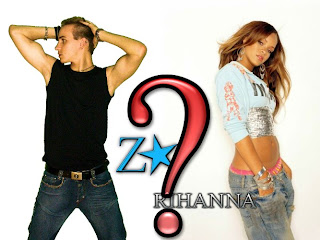 The 23 blond singer worked together with Rihanna about an year ago for the duet of ?Rihanna feat Zedstar ? Unfaithful?.

Certain voices say they’ve met again, but this time it isn’t a ?work date?. Some people noticed they seem to attract each other already when they worked together for the Unfaithful video clip, but they weren’t really in confidence. So we can consider it almost an ?old flame return?, even if they’re both very young.

However they say that Zedstar will participate soon in another Fox TV show as a special guest, so we can maybe know the truth this time too.