Grenada will be featured in one of the world’s largest in-flight magazines. Kerry Smith, Editor of British Airways in-flight magazine, “High Life” brought her notepad to Grenada this week to write about the Spice Isle‘s development after Hurricane Ivan.

Of particular interest to the High Life Editor are the many tourism projects underway in Grenada. Ms. Smith was invited to Grenada by Peter de Savary as part of his media campaign aimed at promoting Grenada on the international market.

Along with High Life Editor, Mr. de Savary also invited Elizabeth Bolshaw, publisher and editor of several European titles including the Sur La Terre, Michael O’Flaherty of the UK Press Association and Christine Goodier of the Caribbean based All At Sea magazine. 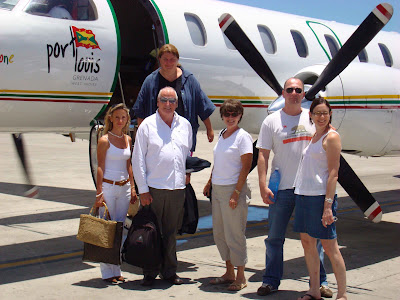 As the in flight consumer magazine for British Airways passengers, High Life’s presence in Grenada will mean that the island will be featured all over the world. With an affluent European distribution of 715,000 readers, Grenada will be exposed internationally.

Plus – There’s a claim you can be fooled by the open air relaxed atmosphere, but the Victory Bar & Grill II has the style, sophistication and most of all? Its location, which rivals the world’s best resorts.

Its unique setting on the water’s edge of one of the most beautiful port towns in the world makes a visit a truly unforgettable experience. The Bar is open seven days a week and has already become famous for its Victory Burgers and Victory Night on Saturday’s with the hugely entertaining Barracuda band.