The numerous supporters and well wishers of St Kitts‘ Special Olympics were thanked by Clarice Cotton, minutes before the local delegation jetted off to Shanghai, China on Wednesday for the Special Olympics World Summer Games.

Digicel, the primary private sponsor, the Caines Foundation and the Ministry of Sports were among top contributors identified by Ms. Cotton, the National Director of Special Olympics. 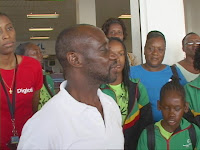 However one person was singled out for a strong commitment which dates back to the birth of the local organization in the late 1980s. Deputy Prime Minister and Minister of Education Hon. Sam Condor.

?Mr. Condor has always been with us,? Ms. Cotton said, noting that he was the first football coach to work with the special athletes. ?Ever since then he has been with us. He has come to national games and volunteered on the field and I want to thank him for his support.?

Ms. Cotton noted that the continued assistance from the Ministry of Education is appreciated and greatly serves to enhance the outreach and success of the local Special Olympics movement.

The national director revealed; ?We are the only team to have brought home the gold [consistently] in international competitions and we are extremely proud of that.?

Choi Yuk Kwan, a representative of Disciplinary Departments of Hong Kong, started the torch run from UC Centenary Garden in Tsim Sha Tsui East to Golden Bauhinia Square in Wan Chai and lighted the cauldron there.

According to the website, the Flame will travel through 14 cities across China, including Hong Kong and Macao, before it arrives in Shanghai on October 2nd.