If this is not a plea for enforcing proper standards via law and prosecution, like seat-belts were made a part of our culture whether we like it or not, then I dunno anymore – 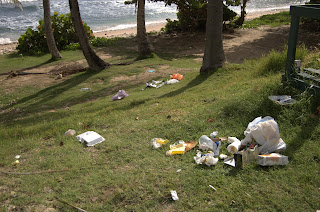 These photos are from Bathsheba area 7:00 am Sunday [2nd Sept] morning, the first one is fresh and 20′ from an almost empty garbage container, on the path that runs from Round House to Edgewater, so someone couldn’t have been ‘just driving past’ and thrown it out the window, but walked along the path, past the garbage container to dump it! 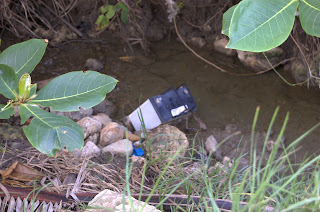 The next is a car battery in the gully thats runs by the Bonita Bar to the beach, the next is by the bus stop along from St Aidan’s Church.

I gave up trying to take photos this morning cause I couldn’t get a shot without garbage in it somewhere and, silly me, didn’t have a garbage bag with me to remove it all, including the dirty diaper left on the rock by Bathsheba pools, YUK!

I’m sure the tourists will love that! I went to Glenburnie one Sunday to take photos and there were old appliances thrown down the rocks by the sea…

I don’t know what else can be done to make people more environmentally aware. I have neighbours that burn ALL their rubbish, including plastic etc, God help the atmosphere, one neighbour thought our composter was a water container!

Don’t we talk enough about global warming, isn’t it all over the internet, news and daily papers?

I gave a chocolate wrapper back to a man who had thrown it out of his car window while parked near our house the other day, and pointed out to him that a garbage bin was just over the road, he had 3 small children in the car, learning from daddy…

A resident along the front in Bathsheba claims the garbage isn’t being collected as often as usual, NOT an excuse to dump it elsewhere! 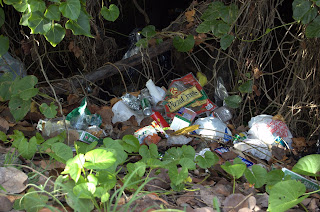 I wish more Bajans were like this lady, and the Bathsheba allegation will be examined, trust me! In the meanwhile – we must DEMAND for Island Constables to gain powers of arrest and enforce already existing laws related to Littering and Dumping!