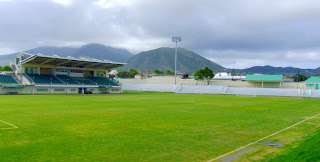 Phase one of the Warner Park redevelopment project is now complete, signaling an end to mass construction at St Kitts? premiere sporting facility.

The completion of the football stadium was the final activity under this Phase, which also saw the transformation of the cricket field to a world class multipurpose complex where major international events can be hosted. This was the case when first round matches of the 2007 ICC Cricket World Cup and the 11th Annual St. Kitts Music Festival were staged at the facility earlier this year. ?Government is continuing to fulfill its pledge to provide modern multipurpose entertainment and sporting facilities,? Acting Director of Sports Dave Connor told SKNIS. ?It also expands the knowledge base of local construction workers who build these facilities and adds to the infrastructural development of the island.?

Connor added the media exposure the country receives for hosting regional and international sporting events is of tremendous value.

The refurbished football stadium features a main stand and two bleacher sections which can seat 2,050 persons. Hundreds more can comfortably be accommodated on a spectator mound and at various open areas around the field.

Four dressing rooms, a media room, a V.I.P. Lounge and five other rooms which can be used for medical, officiating or related purposes are also available – areas for concession as well as a special services section are also designated at the facility.

The sporting facilities at Warner Park, and other locations including Molineaux, Cayon, Conaree and St. Paul’s impressed a recent visiting delegation of officials from Tobago. Tracy Davidson and Godwin Adams of the Tobago House of Assembly headed the group which included the director of sport, a civil engineer, an architect and three representatives from the Tobago Cricket Association. The visit was organized as part of a regional consultation tour which would gather best practices that will be used to shape their design of a top class cricket facility.

While here, the group met with Minister of State responsible for Sports Hon. Richard Skerritt, Charles Wilkin of the Local Organizing Committee and Ingleton Liburd of the St. Kitts Cricket Association.

Ms. Davidson expressed satisfaction over the visit and thought the information gathered would go a long way in helping to design a practical facility in Tobago. She was particularly intrigued with the plans that government has in place to maximize the use of the facilities by hosting overseas teams during their preseason.