Stock broker and clown? Two of the professions George Gill has done in his young span – Texas, Italy have known his footprints apart from Fiji and Australia… Now hailed up as Ital Bajan, he is a hit in Fiji as we have been covering for a while recently, well he has started a business rather than follow a trade… This is what the Fiji Times learned –

The 34-year-old Ital-Bajan even has his own fledgling label and album – Two cents on love – a bubbly, island surfin’ kind of lover’s rock, with strong acoustic and percussive influences, a la Ziggy Marley’s Dragon Fly.

Ital-Bajan is his way of paying homage to his parentage, boasting a guitarist-percussionist Barbadian, Bajan being how the people of Barbados distinguish themselves among the peoples of the West Indies, dad and a jazzer of an Italian mum.

No need to explain the Ital, although it is obvious he was never meant to be a career menome.

In Rasta terminology ‘Ital‘ can mean fresh or vital and he is all of that among the four rockers who ride on the strength of a woman in drummer Lisa, the lady with paternal links to Fiji.

But George, well, he has already done what most of us only dream of.

He is equally at home in Italy and he admitted during the yaqona session he had to relearn the language when he returned there as a young adult.

He even went to El Paso, Texas, in the USA, studying as a young gun financier, learning how to milk millions on Wall Street before chucking it in. He decided that wasn’t for him. His heart simply wasn’t into it.

He then took to soccer and drama. He trialled as professional junior player but didn’t quite make the grade.

That couldn’t hold him down. Using his stage experience grafted in drama school and a few bit parts, he joined a circus in a town just outside Rome, fittingly performing all over the boot of Italy for eight months as a footballing clown.

Despite the clowning, he found better things to do and the typical politeness of a Bajan abroad has stood him in good stead in the other islands down under –

Not for him are the antics pulled by Grammy Award winning fellow West Indians, albeit from another island nation, Inner Circle, who on their “Bad Boys” tour here, started picking up women and partying even before they had left Nadi Airport.

Best behaviour did not stop him from stressing that it is equally important building an intimacy with his audience.

“You know,” he said in that decidedly Caribbean twang, “some musicians don’t really respect their audience.

“Me, I don’t mind repeating myself if I have to get through to the people. For instance, I have no problems with asking them, more than once, if they’re having a good time,” he said.

“How they respond tells me what I am doing or not doing right.

“It is about breaking the barrier between me as a performer and them as an audience.

“In music we become one,” he said.

“It is about validation. And that matters no matter where or for whom one performs.”

It is that simplicity, that honesty that has seen the Barbadian and Cool Runnings, the Aussie root-rockers, build up a near cult following in the month they’ve spent jamming here. 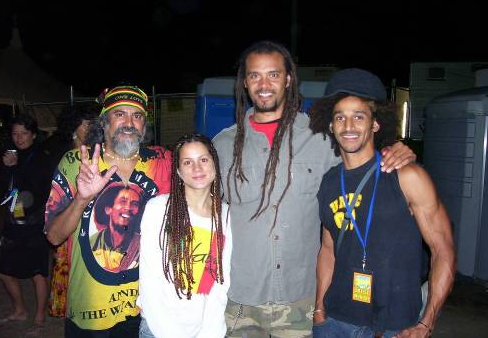 He is proud to say he is an island boy, a pull of the heart string he could not easily ignore when the chance came to escape the winter Down Under with his Fiji connection of bassist Fiu and percussionist James Purmodh, who brought his daughter drummer Lisa to the land of her father.

He says music lovers here are more discerning yet more open-minded about what they see and hear, naturally.

“If they love it, they love it. They don’t pretend to like or understand something if they don’t,” he said. “But they can recognise and appreciate when one tries something a little different.

“In Australia, if you’re a cover act, the people expect you to be note perfect.

“Here the spontaneity of the moment can truly be appreciated.”