Eric Jerome Dickey came to Cave Shepherd and boy, were Bajan women happy! The Vista branch was the first to receive him yesterday and we learned that there were at least 200 women waiting to see him for Tuesday night! According to the evening’s videographer, they snaked around the building! 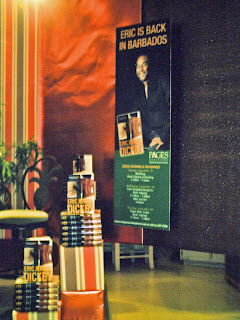 There was a similar rush today at Pages on Broad Street but tonight’s appearance at their Ideal Restaurant was low-keyed in attendance which allowed the audience to get the full effect of the author-cum-software designer/computer programmer/comedian/graphic novel scripter. Here’s one idea as we include a video, this time the audio is much better, LOL –

He read two excerpts from his latest – “Sleeping With Strangers” and “Waking With Enemies” – and had all of the ladies present totally captivated when he deliberately selected the erotica parts of those books. He later told the intimate crowd that he actually studied erotica to be able to do a credible sex scene in his books, he also emphasised he did not tap a booty and in the middle of things ask what she is thinking! 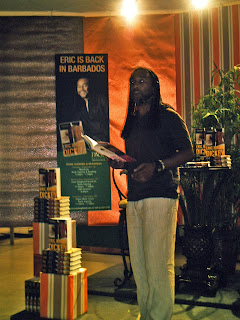 This next video clip is more graphic in the sensuality and total rawness, plus I added some video effects I am now learning –

My questions were fairly banal, but I could not believe the final question came from this young woman in the back, where she tried to interrogate that now he knew what significance his name is if he tried to live up to the reputation? Wow, I gasped out loud and one young lass known for full figured modelling actually got up and left the room – can’t blame her! But Eric was a good sport and laughed it off, but I think they need to do like call in programmes and try to screen questions? 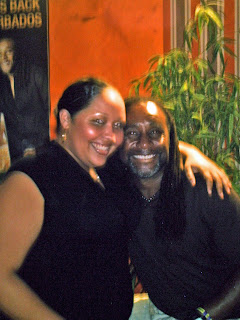 Bajan Reporter asked about the fact he has done extensive work in technology if he created his own website and he stated that he doesn’t really have time to do that and instead he got some folk from Texas to lay it out for him.

When I heard that Gideon (the protagonist in “Sleeping…” & “Waking…“) was dealing with a Mrs Jones I asked if he was thinking of the Billy Paul song and he actually was going to call her Mrs Jackson, but he didn’t want any confusion with the Outkast song but the whole point was to emphasise her MARRIED-ness!

Bajan Reporter also understood he wrote a comic-book series on a romance between Ororo Munroe or Storm from the X-Men and Tchala – rightful ruler of Wakanda, the main supply of vibranium in the world.

Last year it was a six part series and this year it encompassed into a trade paperback, Marvel approached him, and found they had an easy task as he was ever since a lover of comics.

The part that interested Bajan Reporter the most was when we asked him about Bomani D’Mite‘s “Read a Book” – in Dickey’s view it is an important message delivered in a humorous manner, but it is old advice to him as he recalls Chris Rock doing an almost identical routine about 2 or 3 years ago!

Debbie Callender was there and asked EJD if he ate/live/slept writing – he said not at all! Some days are laundry or others on a phone with his agent or folk may think he’s in London relaxing, when it was not a vacation – as he was researching & writing nonstop! 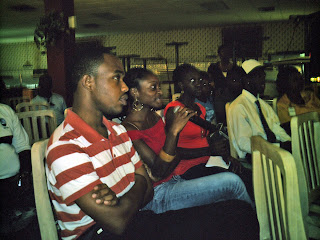 Another audience member posed a query related to race and he stated that he does not see his books as black, but stories that happen to involve black people, he is not looking to fit in a genre. He recalled how he was shocked and embarrassed to learn his works were placed alongside Bishop TD Jakes as bestsellers at a store, and he felt it was blaspheming the famed cleric.

When asked if any of his stuff is being translated into film he said Lionsgate is thinking of making “Naughty Or Nice” into a feature, but there was another studio – he declined to name it – that wished to open the possibilities as they claimed. When he challenged them into clarification – they wanted to alter the race of the participants… Asian or Caucasian and he dismissed them immediately.

EJD learned from a sad experience how to increase respect for his books – change from using an illustrated cover to using models and real photography! It seems the same freelance artist his publishers used was leased with another house and and also assigned to another Afro-American author (I suspect Omar Tyree), but out of this anger from Eric’s editors arose a new concept with covers and this led to more interviews and appearances in different magazines of a higher class.

It was a fascinating evening where in 2 hours he relayed so much of his escapades of doing 14 books in a decade! A great time was had by all, and there were autographs afterwards – I was one of two guys who went up for such a notion, LOL… All of the rest? Yup, bare chicks looking for Dickey!