Let me say from the start I have been trying this video feature on my digital camera, but am still new to it, I know I need more light and stay a bit away from the audio source if the signal is strong as in D I S T O R T I O N, ouch! 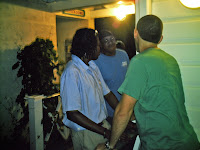 The vids will appear further into the story, now for Brian and JJ’s night by Spring Garden…
Many fans were there (apart from myself, LOL), and many industry folk attended such as – Arturo Valentino from CBC; Emma Saba from Virgo Communications; Malcolm X & Stokeley Murray from Mix 96.9 FM; Mikey “PassThe Lotion” Hulsmeier formerly of Splashband fame now co-founder of “Red Dawg” Productions; both Andrea King and Yvette Best from Nation Publications as well as Khalil Goodman of the Barbados Advocate were there to mark the occasion, but no reps from CBC nor VOB came – sad indeed!
Even if either CBC or VOB didn’t want to carry the item in their “regular” bulletin, they can create a niche by having it exclusively online, such as when VOB ran on their website info on the cave in at Brittons Hill! 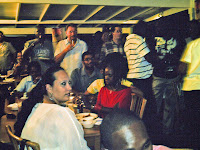 In fact, JJ Poulter from Kite sees bloggers and the internet as an integral part of adding to the genre of music reviewing globally. Brian loves the fact how a blogger can attend a concert and do a review the same evening and add pictures or video…
As further proof of the fact that the Internet is a major ally for musicians, the Garage Band website is featuring Kite‘s “Firefly“as the track of the day for all of Sunday 9th September 2007!
Here’s the end of their other track “Breaking Up” from that night, bear with me, my first time as such and the light was bad and the audio was awful as I went too close to the speakers, now I know better –
Even further – speaking of Firefly, the Mount Gay Centre created two drinks in honour of the dynamic duo, one is 13 Degrees North and the other is of course …. Firefly! 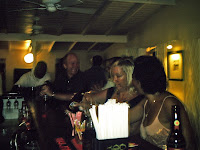 To me 13 Degrees North is the kicker – one part Mt Gay Eclipse; one part orange juice; one part pineapple juice with some fresh lime juice and ice. It’s shaken not stirred into a highball glass where it is crowned with a cherry and an umbrella!
Firefly, while gentler tasting is probably more deadly, this drink’s composition is definitely subtle – a portion of ye olde Mt Gay Eclipse; a shot of Passoa; some raspberry syrup and a dash of fresh lime again… This time it’s blended with ice and capped with not just a cherry, but a sprig of lime leaf as well!
Geoffrey Markle, Mount Gay’s Sales & Marketing Manager says the sponsorship of the album led to the design of the two new local cocktails – which I hope Kite carry with them wherever they tour! 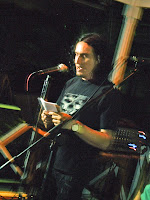 The album is a pioneer in Barbadian home studio recordings and some songs have as much as 30 tracks layering the audio ecstasy you encounter in this RipTide cd. The songs were co-crafted with folks like Sean Paul’s producer Jeremy Harding and out of Barbados, Anthony Lowhar of CMI in Hastings Plaza.
It will be intriguing in the next few days to see how far any of this data reaches the public, because as JJ quite astutely posited – if a top media house of whichever nature (online/radio/tv/ press/etc.) decides they will only carry stories where Jamaica is a drug-running mule then everyone eventually will get a perception that Jamaica is to be avoided unless there is no other option!
Young Mr Poulter is of the view that if the media here genuinely wishes to break away from the trend of what is music here and what is not, then they need to make a stand – even to their editors, and make an effort to dare to be different. 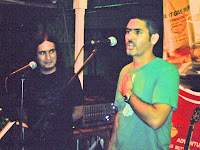 I’d like to add, what with the internet opening the channel for amateur videographers and citizen journalists then media houses have to start being aware of what the trends really are out there and flow with it, not resist the tide as they could drown!
Far be it from me to leave it on a potentially sad note, let’s get a kinda view/listen to Kite’s send-up of Don McLean’s classic which covered the death of JFK, the war in Vietnam, and the plane crash of Ritchie Valens, Buddy Holly & The Big Bopper – Don’s was “American Pie” but Kite’s version is a comedic commentary on the game of cricket in “Macaroni Pie” (pretend the audio is good, ok?) –
Don’t forget – JJ & Brian are at Jumbies every Sunday from 7:00 pm but Thursday 20th will be the public launch of their cd!