The next time Barbados holds a poetry slam, I want to see some of the very powerful stock from both the US and British Virgin Islands come over and give us all a really good run for the money!

I wish you’d just wake up
I miss your conversation
I would hurt if I woke you up too soon
Yet rejoice with your awakening
Your lips so soft I kiss this morning
Your eyes still closed I sigh
And anticipate the depth of conversation
Beyond your becoming smile
Yet thankful I am that you are asleep
For this magnificence
I witness God’s gift to me
You wake up, gazing adoringly
You are my conversation piece

If you don’t believe me, then you need to get a copy of VI Callaloo – in fact, one poet has a Bajan mother (April Glasgow) and the other is Barbadian transplant for the last decade and a half (Stephen Payne)!

There many topics but one that seems to repeat itself is race and black versus white, more open than here in Barbados yet sad and unnecessary anywhere; V. Celeste Fahie’s “Who’s On First” is a play on the old baseball comedy routine and a pun as to who settled which US Virgin Island first and suggesting whites have settled St John, much like Barbadian counterparts have run to their Bajan parish of St John especially in Cattlewash and then you only see them at Merrymen concerts or at the Olympus on weekends!

(Face it – the Caribbean has white folk, like it or lump it – for that matter I wish Cable & Wireless would stop ignoring that fact on the cover of their phonebook for the last decade or so, put the white folk and the Indians there, black people did not spring out of the ground from nothing – our ancestors were brought here against their will, it was a long time ago, get over it – in reparation, what do I do? Pay myself? I am black, white, Carib, etc.)

Despite that minor difference, it’s poetry with class, so here’s a bit more on the poetry book – “Callaloo is a tasty Caribbean dish that is high in nutrients and flavor. Callaloo, which is similar to Pepperpot, is a ?cookup? of spinach or dasheen and other leafy vegetables, okra, peppers, onions, the usual seasonings and the ?salt thing? of your choice. Some of us remember Callaloo sometimes including fried fish, salted pork and ground provisions which makes this dish a complete meal.

“The idea for this book came about from the Callaloo concept ? a complete meal with different flavors. There are eighteen poets included in this compilation. Each poet has a unique writing style that offers the nutrients that make this pot flavorful and complete. V.I. Callaloo consists of poems of love, awareness, community involvement and culture.”

so far you have been
an inspiration
guiding me through my spots of
blocks
emotional, spiritual and mental
blocks
you have helped me break down the barriers
allow the light to encircle me
and for the darkness
block
the negativity…

Just some of the words of Linette Rabsatt who has been the main co-ordinator for this gathering, she was telling BVI’s Buzz magazine how the book is a step towards redressing a lack of representation in BVI and even USVI culture – be it music, literature or other means of artistic expression.

The great book (thanks Linette) can be found and purchased online at either AuthorHouse, Barnes & Noble, Amazon or Yahoo!

I like the BVI Buzz Magazine, it covers youth and sports within the British Virgin Islands, and looks at jumprope as a national sport! The BVI Grasshoppers and a look at Kabaddi – this is an ancient Indian martial arts that is gaining popularity in Tortola, Beef Island the rest of the BVI!

But the CORE magazine to highlight BVI’s hip-hop culture in the main, is not that well put together for the most part… I think they’re trying so hard to look cool they forgot the main thing to push fwd is the MESSAGE!

Simple rules of thumb – a navy T-shirt is not going to reveal a black-ink caption; deep forest green also is not friendly to black-ink text …. yellow or white text would pass in either case, ok? Next thing – having a coat of arms with writing as background for more text is very confusing to the brain and hurtful on the eyes! Look at the Kabaddi page in Vol. 2, No. 1 at the BVI Buzz Magazine and see how clever juxtapositioning is done!

It would not matter if the articles were boring, in fact, they very interesting and that’s what made it so frustrating!

There is an interesting feature on the BVI’s version of Square One, they’re called the X-press Band and they’ve been playing for 20 years now – 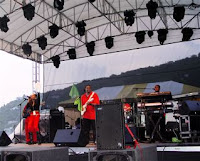 The X-Press Band is an extremely versatile group that has performed for over two decades throughout the United States, Canada, South America, West Africa and the Caribbean. Organized in 1985 in Brooklyn, New York, the five core members of the band are Al Baptiste, Sr., on keyboards; Patrick “P.O.” Edwards, lead vocalist and guitarist; Dean Baptiste, lead vocals and bass; Toby Derima on drums; with Pat Ragguette on lead and background vocals. X-Press Band’s repertoire is quite extensive and includes Soca, Reggae, Jazz and R&B., but the band’s primary genre is Calypso. More than 90% of the music recorded by the band are original songs, written by its members. In 1985 the group released its first single with the songs Sugar Candy and Leroy.

Also intriguing, was the break from the hip-hop coverage in CORE when they examined the life and times of the physically challenged but vocally powerful Neville Peter, who’s fairly recently made a complete transfer to God’s Hands and while doing so has sung with the likes of Bishop T. D. Jakes –

At the age of fourteen, Neville began to study piano. It was offered as an elective at his school. Two years later, he rediscovered his voice at a high school Christmas concert where the audience gave him a standing ovation.

Not long after, he began receiving invitations to sing at other concerts, church events and talent shows on the island. This led him to reconsider his career options. He began taking his music very seriously. By this time, most of his musical interests were geared toward Jazz, Pop, Reggae, and R&B.

He began singing in many of the local nightclubs, but out of love and respect for his parents, he still attended church and would sing there from time to time. At the age of 19, Neville left St. Thomas and moved to Miami. There he attended the University of Miami where he received his BA in Studio Music and Vocal Jazz.

While in college he received an award from Down Beat Magazine for best National College Jazz Male Vocalist of the Year. During this time he began performing on South Beach and other clubs in the Miami area. Neville has toured with Cassandra Wilson and has worked with Gladys Knight. When Gladys heard a recording of him singing his original music, she said that he was destined for the Grammies.

However, shortly thereafter his career in secular music was cut short by God?s divine providence. Although resisting God?s call initially, on January 1, 1998, while playing at a New Year?s Eve party in Michael Cane?s restaurant, Neville decided that he had seen all the world had to offer and he did not find it appealing.

It was at that moment He resolved to give all of his talents to God, withholding nothing. He then began writing and performing Christian music and God has really blessed! 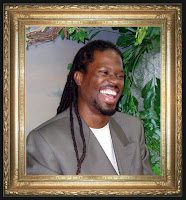 He has written over 100 Gospel songs and has had the privilege of sharing the stage with Gladys Knight, Donnie McClurkin, Yolanda Adams, Natalie Cole, Shirley Caesar, Richard Smallwood, Kurt Carr, Bebe Winans, and many others. He has performed at the White House, Carnegie Hall and appeared on many television programs including, TBN?s ?Praise the Lord? program, I-Gospel with Alicia Williamson, Celebration of Praise with Ron Rosson, and Cynthia and Friends.

Both Neville and the X-Press band have cd’s for sale directly from their websites. Direct Marketing – the way forward via the Internet, VI Callaloo made sure to follow suit!