BLACK WOMAN RAPED AND TORTURED IN USA BY WHITES; FOR BEING BLACK

My friend Betty Holford at CBC has once again sent a powerful contribution, it is horrendous, sad and incredible simultaneously! Before publishing I have verified this and you can too by exploring the links within the story. Here is the awful tale, which seems as bad or worse than the Jena 6 – 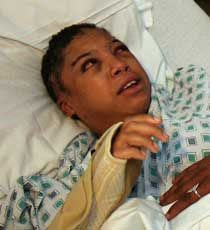 This happened in West Virginia, USA very recently and yesterday, Wednesday 12th Sept, 2007 – Megan Williams was still being treated for this in the hospital. 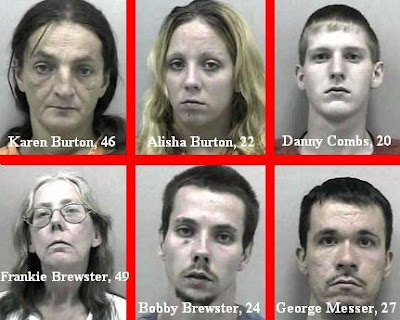 She was Tortured and Raped for a whole week, by Six White individuals, Three males and Three Females Between the ages of 20 and 49.

CNN normally does not reveal sexual assault victims’ names. But Williams, who is hospitalized, and her mother, Carmen Williams, wanted her identity revealed.

Police said Bobby Brewster raped Williams, forced her to lick blood and drink from a toilet, and told his mother to kill Williams if she tried to escape.

According to criminal complaints filed in the county, Williams was assaulted, stabbed in the left leg, choked with cords and beaten for at least a week. When she was found, big parts of her hair had also been torn off of her scalp.

Williams says that Alisha Burton 22 cut her ankle with a knife while saying, ‘That’s what we do to Niggers around here,’ police records show.

‘I don’t understand a human being doing another human being the way they did my daughter,’ Carmen Williams told The Associated Press on Tuesday from her daughter’s hospital room. ‘I didn’t know there were people like that out here.’

As the deputies spoke with a woman on the front porch, ‘a female inside the residence limped toward the door with her arms held out, saying ‘Help me,’ ‘ according to a news release from the sheriff’s department.

‘It’s something you’d expect to see in a horror movie, not in Logan County,’ Abraham said. ‘She was subjected to unendurable torture down there.’

The six are charged with kidnapping, sexual assault, malicious wounding and battery. If convicted of kidnapping, a suspect could face a sentence of up to life in prison. The penalty for first-degree sexual assault is 15 to 35 years.

Abraham said he is seeking the maximum sentence on the kidnapping charges. In addition to the Brewsters, the suspects are Danny J. Combs, 20, of Harts, West Virginia; and George A. Messer, 27, Karen Burton, 46, and her daughter, Alisha Burton, 23, all of Chapmanville, West Virginia.

‘They all have previous records and have been arrested numerous times,’ Sheriff W.E. Hunter said Tuesday. ‘They are familiar to law enforcement.’

Frankie Brewster was charged with first-degree murder in 1994, but pleaded guilty to the lesser charge of manslaughter in the death of an 84-year-old woman. She was released in 2000 after serving five years in prison, according to court records cited by the AP.

All of the six individuals that are involved in this case are accused of 108 different cases of crimes all combined.

All six were being held in lieu of $100,000 bail, and all requested court-appointed attorneys, the AP reported.
Investigators are still looking for two other people suspected of driving Williams to the home, according to the AP.

Ms Williams had not reported her daughter missing, saying Megan Williams often disappeared for weeks at a time.

Carmen Williams said she is ‘horrified‘ by her daughter’s injuries.

‘She wakes up crying, and the first thing she hollers is ‘Mommy,’ ‘ she said.

Spread this article since the news stations are trying to keep this quiet.

I cried when I read this and I wanted to torture these evil brutes as much as what happened, that this can happen in this day and age – does not say much for the USA, Bush nor humans in general.