Twenty20, where cow-swipes at a fastball can either make or break a test and even pelting may be, um, misinterpreted or misconstrued. Maybe what is different is the fact there were no massive incentives like other similar games? Well, the sad fact is the LOSE-dies (as opposed to them being WIN-dies) have been sent packing after only two matches! Despite a UK expert on US baseball pitching and all other programmes to get them on the ball – if you see a pun, then it can be shoved up their collective players’ bum!

Imran Khan – no connection to any of the four namesakes found on CricInfo, and actually in this case – their brave Media Mgr, has been witness to the slaughter and relays their excuses –

West Indies captain Ramnaresh Sarwan spoke with the media after the team lost to Bangladesh and exited the ICC World Twenty20 Championship. Following are excerpts from his facing the media in the aftermath.

On the bowling letting the team down once again:

On how important the toss was:

On whether there was much movement off the pitch early on: 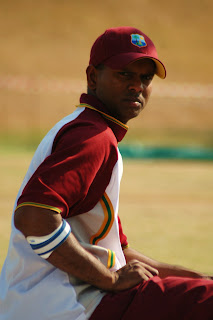 On whether he has to work with this group of players only or whether there are other players who can force their way into the squad:

There are always opportunities, we aren’t playing that well in Test cricket either but I think there are opportunities. I don’t think anyone’s place is cemented in the team apart from Chris (Gayle) and Shiv (Chanderpaul). It’s a matter of players doing well in the domestic competition and anyone would be eligible for selection once they do well.

On Dwayne Smith playing well at the end of the innings:

Both Dwayne and Marlon (Samuels) played well in the end but it was asking a bit too much of them at the end. We lost out on a few runs at the start of the innings and in the middle overs as well. 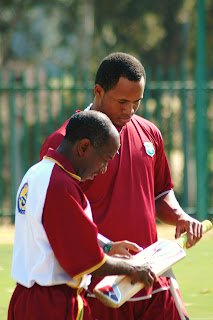 On Bangladesh making a habit of upset victories and whether they are still minnows:

We never considered them minnows. They have been playing well and they are improving rapidly and I’d like to say congratulations to them and wish them all the best for the rest of the tournament, they deserve to win today.

On whether he sees Bangladesh winning more matches in the tournament:

After what happened last night (Zimbabwe beating Australia) and today (Bangladesh beating West Indies) anything is possible and I think it makes it even more possible in the Twenty20 version of the game.

On whether the West Indies team took the Twenty20 Championship seriously:

We were very eager about it and excited about it but I don’t think we executed our plans very well, we didn’t bowl well and you saw how we fielded. It is a matter of us going back and working hard, I know we’ve been saying this for the longest while about our fielding and bowling and sometimes our batting. One of the things I’ve stressed on since I became captain is consistency and that is something we need to focus on.