The pediatric services at the Joseph N. France General Hospital came in for high praise by United States Ambassador to St. Kitts and Nevis – Mary Ourisman. 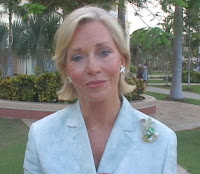 The Ambassador, who visited the Federation to participate in the 24th Independence celebrations, toured the hospital along with the local Minister of Health Hon. Rupert Herbert and his Permanent Secretary Elvis Newton. The tour was conducted by Director of Health Institutions Mrs. Eugenie Condor.

The U.S. official told SKNIS that she was anxious to visit the medical facility.

?The pediatric ward was completely restored after being damaged in 1998 by Hurricane [Georges] which did severe damage to this hospital and particularly to the pediatric ward,? she said. ?I am very proud that my government chose to do a restoration project at that time. It is such a great joy to see.?

?We visited the children and saw some of their parents and [interacted] with the staff at the hospital,? she stated. ?It was great to see the love and care they [the children] were getting in such a clean, beautiful environment.?

The Ambassador noted that she thoroughly enjoyed meeting a newborn baby girl called Summer. Summer was one of two babies born on Independence Day.

The United States government provided training and counseling techniques for the hospital staff members that work at the pediatric unit.

Ambassador Ourisman noted that she held discussions with local officials on various projects in St. Kitts and Nevis and revealed that additional assistance will be forthcoming.

?The United States will be involved,? the U.S. diplomat stressed. ?Not only in this hospital, but in this country, and in this region.?

Ambassador Mary Ourisman is based at the United States Embassy in Bridgetown, Barbados. She assumed duties as USA Ambassador to Barbados and the Eastern Caribbean on October 31, 2006. The Texan envoy was appointed by U.S. President George W. Bush.