The new President of the West Indies Cricket Board (WICB) Dr. Julian Hunte has praised the regional Under 13 cricket festival held annually in St. Kitts and Nevis, and noting that it is a model which his organization is very much interested in.

During a news conference yesterday at the Sugar Bay Club at Frigate Bay, President Hunte said that the programme, which is now in its tenth year, is on the agenda for the WICB.

?I know that St. Kitts and Nevis has had many successes in this programme,? he stated, adding that he was familiar with the discussion of having greater participation from other territories. ?It is something that is on the (WICB) agenda ? and certainly we will be able to draw from you experience here in St. Kitts and Nevis.? 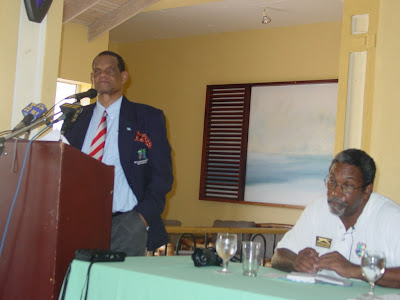 The president suggested having former West Indies batsman Keith Arthurton, who is very much involved in the local programme, visit several countries to help further this initiative.

The 2007 St. Kitts and Nevis Under 13 Cricket Festival takes place from August 21 to 30. Participants will be welcomed at an opening ceremony at Grove Park, Nevis on Tuesday. Teams from Bermuda, Anguilla, Montserrat, Trinidad and Tobago, the British Virgin Islands, Dominica and Barbados will contest the competition.

Squads from Antigua and Barbuda, Nevis and St. Kitts will also take part.

The contest will be played in round robin format where each team plays the other. The team with the most points at the end of the tournament will earn the championship title. Barbados won the event in 2006.

The match is organized by St Kitts’ Ministry of Tourism, Sports and Culture.