For all of the Bajan metalheads who wondered whatever became of Trini rock group The Orange Sky, they have been busy over and away but not too much in their own backyard, in fact – Ye Olde Merrie England may be their next set of stomping grounds for a bit… The Trinidad-based rock band secured endorsements with Dean Guitars, Music Man Basses and Yamaha Drums.

The new compact disc “Psycho World” is out and apart from playing with Yngwie Malmsteen, they have jammed with Zeppelin Tribute an official band patterned after Robert Plant & Jimmy Page‘s brainchild… 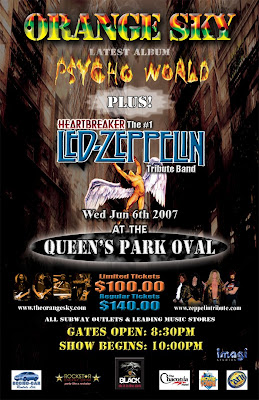 ORANGE SKY, the pride of the Caribbean nation of Trinidad and Tobago, is announcing its second tour with legendary guitarist YNGWIE MALMSTEEN [ED’s NOTE – pronounced: eng-vee, mahm-steen] for May, 2006.

Dates are scheduled in the United States and Canada. Orange Sky first toured with the Swedish six-string master in the winter of 2005.

?We are so happy to be back. Being on tour with Yngwie is always an honor and people should expect to see us rocking harder than ever!? says Nigel.

Orange Sky?s career has shot off like a rocket.

The band, which has been named International Ambassadors by Trinidad and Tobago?s Ministry of Tourism, has opened concerts by the diverse likes of DOKKEN, ADEMA, BUCKCHERRY, SKID ROW, SIX FEET UNDER, HATEBREED and LUDACRIS.