The Republic of China (Taiwan) just renewed its commitment to support the development of human resources and the sporting infrastructure in St. Kitts and Nevis.

Resident Ambassador of the Republic of China (Taiwan) His Excellency John Liu presented Prime Minister and Minister of Sport Hon. Dr. Denzil Douglas with a cheque for US $1.4 million to be used for the ongoing construction of the athletic facility at Bird Rock.

Ambassador Liu explained that the vision of the government is extremely progressive and Taiwan was proud to have St. Kitts and Nevis as a partner.

This major payment follows an initial contribution of US $500,000.00 in mid-June. Prime Minister Douglas thanked the Asian diplomat for his country?s support. 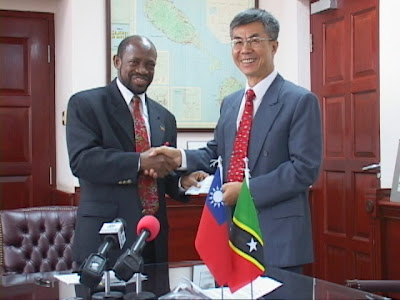 The Prime Minister gave an update on the ongoing construction work revealing that 45 percent of the foundation for the main pavilion is completed. He also noted that the internationally renowned company Mondo, which will install the tracks, is pleased with the work progress and is mobilizing to perform its task here when called.

Prime Minister Douglas noted he’s been assured by relevant authorities the Bird Rock athletic stadium construction project is on schedule and will be ready to host the 2008 CARIFTA Games in March.