RBPF ask fugitive under Barbados Manhunt to surrender: They’re also appealing to public to be eyes & ears for escapee

Ryan Bullen was at the QEH receiving medical treatment and was guarded by Prison Officers when he escaped. He is considered to be dangerous and members of the public are asked not to confront this person, but to call the police immediately.

The Police Force is also appealing to Ryan Bullen to surrender himself. 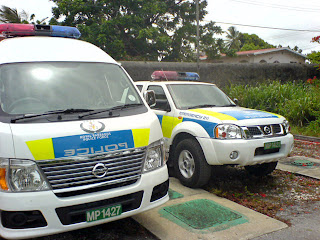 DESCRIPTION: Ryan is between 5?9? to 6?.0? tall; of dark complexion, stout build, black shoulder length locks or plaited hair; sometimes wears a short beard, flat ears, wide set brown eyes, thick lips; tattoo on forehead extending between his eyes. He also has the tattoo of the word ?PRINCIPLES? on his left arm.