Nelson Arms 2 in Worthing has been a great place for karaoke on Saturday nights for quite some time, now they are branching into live performances on Sunday nights…

Creative Marketing consultant Lee Sorenson, when not not devising clever ad campaigns – the logo, as well as the farmer himself in Farmer’s Choice and the Ty-Phoo tea muppet are some of his mental offspring, plays a mean guitar and with two other musician dudes (also ex-Redmen) splintered away from the Red Men – over a decade now, but not public knowledge in the main – and formed Jukebox.

Neat idea, but since Nelson Arms 2 is hiring them to draw a crowd, then they need to invest in some things – advertising (even if e-circulation, like Limelight Cafe) and proper lighting for folks to see the guys playing (see dim photo despite increasing light exposure on digital camera & using flash)! 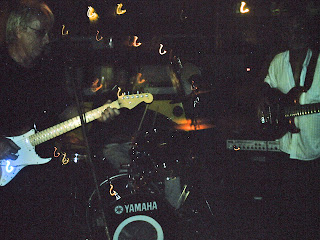 They do all kinds of alternative and rock such as a bit of Bob Dylan or long-time stalwarts such “Hand Jive” and some Eric Clapton if you ask very nicely. Cool group and great fun, when you have the chance.

But did you know from Friday 3rd August until Tuesday 7th the Nelson Arms 2 ran NON-STOP? The bash’s name was based on the name of a George Clooney / Salma Hayak / Quentin Tarantino movie… From DUSK TILL DAWN & DAWN TILL DUSK!

That’s a great concept but it had no muscle – you had Kadooment to run a pre-Halloween special; costume contest; Bloody Mary’s at half-price; have Jukebox play “monster” songs – eg;– Werewolves Of London, Monster Mash, theme songs from horror flicks and similar fare (to be fair – Jukebox did play Tom Petty‘s “Free Falling” which is about vampires, indirectly), in other words? A bloodier good time could have been made than what was actually experienced!