Miami Restaurant enlists Barbadian Singing Frog as Nightclub Act – Return of the Sword, aka: Fitzroy is Back!

Not sure if you’ve heard, but the boys of Secret Identity and I are back at it again, with a full slate of shows for the fall and an October tour to boot. 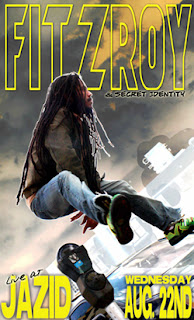 It’s a return after a long hiatus during which I’ve been shooting some music videos, and recording the next album, “Lady Babylon“, due early next year.

It all kicks off again at Jazid next Wednesday, Aug.22nd at 11p.m., where we’ll be performing some of those new tracks, and videotaping the whole riotous affair so we can storm YouTube in the coming weeks with performance footage, as well as shots of me brushing my teeth and stuff like that for the absolute die hards (any of you out there… hello?)

To kick start our collective memory, I’ve attached a recording of “Turn Off Your Head” from the last show we did before I stepped away for a bit, a throwdown last December at Bullfrog Eatz (R.I.P.).

It was two days before Xmas, we had three extra people in the horn section who had no clue what was going on, and someone in the band (surprisingly not me) had too much rum. It’s a bad recording, and the playing is a bit messy in places, but there’s some magic in there.

I love it, but it’s trash compared to where we’re going next.