Ku Klux Klan as heroes? Say It Ain’t So! Sad thing is, Reputable Archivist made this claim

I know I spoke of Undercover Black Man before and this new item from David Mills blew me away – he found how ENCYCLOPAEDIA BRITANNICA declared a bunch of racial hooligans as defenders of virtue; granted this was 96 years ago, but isn’t an educational archive supposed to be IMPARTIAL? Dave, do your thang –

Ever feel like the KKK gets a bum rap?

I mean… there?s two sides to every story, right? Maybe a case can be made that the original Klansmen were heroes. Freedom fighters. Manful defenders of their women. Soldiers of God.

Well, don?t risk pulling a muscle on that little mind experiment, because the case was made. In the Encyclopedia Britannica, the finest compendium of general knowledge in the English language.

You know I love rummaging through old texts. You step back in time 100 years, you?re bound to discover some interesting perspectives on things. Dig it: The contents of the classic 1911 edition of the Encyclopedia Britannica (now unprotected by copyright) are online and searchable at www.1911encyclopedia.org.

For shits and grins, I looked up ?Ku Klux Klan.? 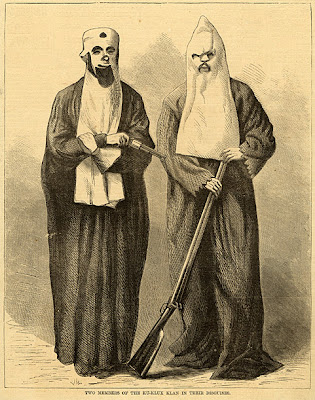 The current Encyclopedia Britannica describes the Klan as ?either of two distinct secret terrorist organizations in the United States, one founded immediately after the Civil War…, the other beginning in 1915…?

?KU KLUX KLAN, the name of an American secret association of Southern whites united for self-protection and to oppose the Reconstruction measures of the United States Congress, 1865-1876.?

?The object was to protect the whites during the disorders that followed the Civil War, and to oppose the policy of the North towards the South, and the result of the whole movement was a more or less successful revolution against the Reconstruction and an overthrow of the governments based on negro suffrage.?

Wow. Sounds kind of valorous when you put it like that. How did this revolutionary movement begin?

?[The Ku Klux Klan] began in 1865 in Pulaski, Tennessee, as a social club of young men. It had an absurd ritual and a strange uniform. The members accidentally discovered that the fear of it had a great influence over the lawless but superstitious blacks…

?The various causes assigned for the origin and development of this movement were: … the corrupt and tyrannical rule of the alien [i.e., Northern whites], renegade and negro…; the disfranchisement of whites; the spread of ideas of social and political equality among the negroes; fear of negro insurrections; the arming of negro militia and the disarming of the whites; outrages upon white women by black men;? ?

? ?… the humiliation of Confederate soldiers after they had been paroled ? in general, the insecurity felt by Southern whites during the decade after the collapse of the Confederacy.?

Perfectly understandable. So what were the Klan?s stated principles?

?[T]he following are characteristic: to protect and succour the weak and unfortunate, especially the widows and orphans of Confederate soldiers;? ?

Awww… widows and orphans. Nobody ever talks about that!

? ?to protect members of the white race in life, honour and property from the encroachments of the blacks; … to defend constitutional liberty, to prevent usurpation, emancipate the whites, maintain peace and order, the laws of God, the principles of 1776? ?

People, let me hereby repeat: This is from the ENCYCLOPEDIA FREAKING BRITANNICA!

? ?and the political and social supremacy of the white race ? in short, to oppose African influence in government and society, and to prevent any intermingling of the races.?

I see. So how were these noble principles actualized? What were the Klan?s tactics?

?To control the negro the Klan played upon his superstitious fears by having night patrols, parades and drills of silent horsemen covered with white sheets, carrying skulls with coals of fire for eyes, sacks of bones to rattle, and wearing hideous masks.?

Unfortunately, there’s a lot more… You need to read it yourself!