A folklore group has done St. Kitts and Nevis proud earning the title of ?Best Visiting Troupe? at the August 02 to 12 Carnival in Anguilla.

Sylvester?s Masquerade won the trophy in this category for its exciting presentations and professional work ethic at various functions. Founder Sylvester Huggins told SKNIS, that his group has been performing for ten years in and outside of the Federation. He said winning this award was extremely gratifying. 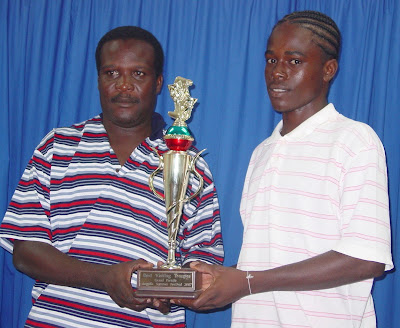 Sylvester Huggins (left) and Kareem Mitchum hold the trophy for ?Best Visiting Troupe? at the August 02 to 12 Carnival in Anguilla

Huggins noted that there are 12 performing members in his folklore group. He explained that his group has a bright future as some of the dancers are fairly young.

Kareem Mitchum the troupe?s Captain is one such person. The 17-year-old started performing at the age of five. He revealed that his interest in the art form developed after seeing a local group perform during Carnival. He subsequently spoke to the owner, who he affectionately called ?Brother Eddy? and asked him to teach him how to ?Dance the Masquerade.?

?He taught me and I just love the Masquerade from there,? he stressed.

Mitchum’s dedication to the art form is shared by other members of his family. His 6-year-old twin brothers are also members of Sylvester?s Masquerade Troupe.

Mitchum told SKNIS that he has learnt valuable life skills such as teamwork, discipline and leadership from his involvement with the folklore group. He said that the practice and performances can be challenging, particularly when weather conditions are factored in.

The young man however, said that it is rewarding for him as he has formed lasting relationships and has had the privilege of representing St. Kitts and Nevis in various overseas territories. Mitchum said that winning the trophy in Anguilla was a proud moment and served to inspire him to continue performing.

He encouraged other young persons to join cultural groups. Sylvester Huggins thanked Cable and Wireless for its support as well as the Departments of Culture and Finance.