In his own words, here’s the pin of Swingpin Records, David Pilgrim!

Dear Folks and Friends,
I?m back at SUGAR BAR, the legendary restaurant owned by songwriters ASHFORD & SIMPSON. I?m going to do a semi-acoustic set and work in some of those new tunes you been hearing me speak of. Swing through and ketch de style! 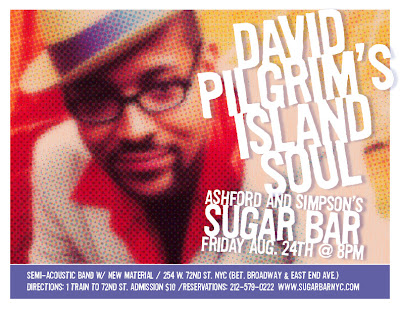 FANTASTIC VOYAGE: I?ve been sitting in secretly with my friend MARITRI at VOYAGE, located at 117 Perry St. @ Greenwich St. in Greenwich Village. She?s hosting an event called “ONE MIC“. Its @ 8 EVERY MONDAY until 10 or until peeps get tired. No cover, great food and drinks. It?s a great showcase for great songs and great talents overall. Guess who stopped through last week? COREY GLOVER of LIVING COLOUR. He promptly blew the roof off and us away with his absolute sledgehammer of a voice. He was accompanied by V. JEFFREY SMITH of THE FAMILY STAND. Imagine I got to jam and sing with cats of this caliber? Prrrresure people, Pressure!

MUSEUM EXHIBIT: Details still in the works, but it looks like I?ll accompany my bredren COLIN CHANNER for the reading of his piece HOW TO BEAT A CHILD THE RIGHT AND PROPER WAY yet again at THE BROOKLYN MUSEUM as they open an new wing for their fall season. The JOE?S PUB performance was an absolute smash, and seems to keep breeding more interest. I keep telling you, strickly Broadway for these West Indians!

ACT RIGHT: Getting a chance to act in a Trinidadian TV show, THE REEF, later this month. I play the role of a journalist/ CIA man to the best of my ability. What?s my motivation? Stay tuned for listings!

GHANA GONE CLEAR: Ghana was an unexpected mixture of chaos, revelation, elation and confirmation. To say it was a great non-linear trip is to severely understate. The music is in a state of complete metamorphosis. In Cape Coast, the site of the world 2 largest slave castles, there was more roots reggae on the radio than in Kingston, Jamaica. In Accra, the bustling capital, there was more hip?hop than Brooklyn NY. What we do here in the US influences the rest of the world so much! At the same time the average Ghanaian knew little about the Caribbean, so attempts to make connections were a sometimes a complex, hilarious maze of misunderstanding, Ali-G style patois, and generally waiting about. Now I know where my people come from! Gotta do a travel blog on the MySpace page and work it out. Hold tight!

BIG-UP SECTION: Folks out there you should hear:

ROOTS AND CULTURE: MAVIS STAPLES new album NEVER TURN BACK features the singer in top form over a bluesy, haunting rhythm section. She sings civil-rights freedom songs with such aching, rootsy commitment that she could only have been there to do so.

Okay folks, that?s it! Come on out to SUGAR BAR on FRIDAY AUGUST 24 @ 8:00 pm and pull up a chair. If not, I always feel you in spirit. Welcome to the new folks on the mailing list!