Remember I was asking about George Gill? Got a response and photo! This is what my source sent me, thanks Lester –

The name ?Cool Runnings? was suggested by Chris Cook of South Beat Entertainment Agency in 2003 based in Sydney, Australia to cater for all Reggae lovers in the state of New South Wales and Beyond.

Due to the popularity of the film in Australia, the name was used to differentiate from the hundreds of other ?live bands? and to suggest to the people of Sydney the genre of music being covered, which was, all your reggae favourites played ?Live and Direct? with a slight whiff of Rum containing No sequences, Click tracks, Voice octave dividers or Dub tracks.

The 5 piece band was formed by Kepone Fiu former bass player of Australian Afro-reggae bands such as Klub Hi-Life, Marabi Groove, Two Tribe, Calabash and Montego Bay amongst Others and was managed by South Beat Entertainment, one of the largest live acts booking agencies in NSW, Australia.

The Fiji line up will see ?Ital? George Gill of Barbados, West Indies on lead vocals and lead guitar, James ?Jemesa? Purmodh on percussion and his daughter Lisa Purmodh on drums, the Rapper George Thomas and Fiu on bass playing cool reggae tunes and showcasing their originals to the masses.

Jemesa (Suvavou, Lami) is one of the founding members of the first reggae band in Australia ?UNTABU? formed in 1979 and managed by Len Anthony.

The band consisted of former Fiji musicians Rupeni Sailosi Davui on bass, Joel Knight on keyboards and vocals with Jemesa on drums and percussion.

Untabu toured all over Australia and New Zealand and was the yardstick in which all other late arrival reggae bands in Australia were measured by.

Jemesa will be on percussion for this Fiji tour with his daughter Lisa Purmodh taking over on the drums.

The youngest member of the group will be coming to Fiji directly after a tour of Cuba and the Caribbean with Errol Rennau and his group ?Caribbean Soul?. The band had previously toured Fiji with Errol the band leader and former World Limbo Champion who is married to former Fiji resident and now Australian citizen, Jane Heritage.

Lisa is one of the hottest rising stars of the Sydney music scene and apart from Caribbean Soul, is also playing with ?Gervais Koffi and the African Diaspora? and The Bob Marley cover band ?One Love?. Lisa has been playing drums since the age of 6 and with the benefit of the various Australian Music schools, International Drum clinics and Tutors (Jemesa being the main tutor) offered in Sydney, is poised to be one of the leading Afro-reggae and Jazz drummers in the not too distant future playing in some of the best venues in Sydney including regular sessions at ?The Basement? the original and leading Jazz venue in Australia. 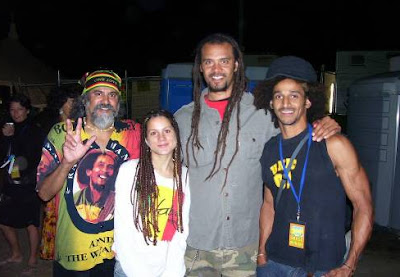 ?Ital? George hails from Barbados, West Indies and is another bright young talent to have emerged in the Australian reggae scene in the past year. The tour will hopefully see ?Cool Runnings? release some of George?s originals to the masses. Nuff niceness !

Born in Bagasau of Rotuman heritage, Fiu has been playing Afro-reggae in Australia for the past 20 years. Through various bands has toured Europe, Africa, Asia, Tasmania and all over the East and West Coasts of Australia.

Never having played in Fiji before apart from organizing the 1993 tour to Fiji of the Zimbabwean Jit-Jive group ?Bhundu Boys?, Fiu has finally realized his dream of playing at HOME entertaining all Reggae lovers. Irie Ites and Jah bless us all ! !

George the latest Toaster / Rapper to have arrived in the Sydney reggae scene, has the moves, the phrasing, the onomatopoeias and not forgetting the looks to match it with the best. Currently Fiji?s best rapper in Sydney, Australia.

Paul debuted his music career at an early age playing keyboards for one of Australia?s most successful artists, Richard Clapton. He toured with on of the country?s top ?boy-bands?, KULCHA, who won an Aria Award for Best New Song. He was musical director for Moses O?Jah (Best World Music Group 1998 Danish Music Awards). In 1998, he was invited to London to record Hammond organ and grand piano with members of George Michael?s band and Massive Attack. He also runs a music production company, has had three top ten hits in the South Pacific and has produced pop/dance music that has been placed with all major music labels.

His current efforts are focused on the set up of an high-end, audio-visual facility that will combine the resources of Australasia, India and the West for the purpose of music and film production. The production house, under on umbrella, will be able to produce soundtracks, albums, 3-D CGI based-animation film, video and other multi-media.