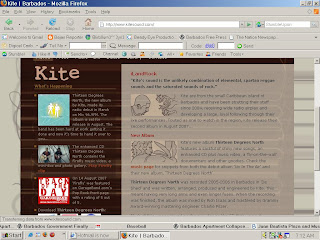 First there was ?Desire? but that didn?t work out due to severe creative differences with management at that time?

Then J. J. Poulter and Brian Marshall were all that was left from the ashes of that group, with the two having to restart from scratch and the climb was long ? I remember when JJ played solo at the then ?X-Ray? bistro which is now the Greek restaurant ?Opa.?

Determined to take it higher this time around, JJ and Brian reformed as ?Kite? ? their sound is like a British version of the Bare Naked Ladies from Canada and JJ agreed with this assessment when I called him up before they went on tour?

And Kite recently unfurled their debut disc ?Up In The Air,? to a massively popular reception at both MacBride’s Irish Pub on St. Lawrence Gap and at the Red Rooster in Hastings. The slightly Bajanised remake of ?Breakfast In America? was recorded at Gray Lizard Studios in Belleville (there?s a cute reference in it to fishcakes that SuperTramp never had), and if you?re listening on headphones from an audiophile?s perspective, that particular track was sharper and cleaner than the rest. It doesn?t stop anyone from appreciating the rest of the album nevertheless!

But as for other cuts on the album, ?Nice to Finally Meet You? and ?Wake Up? are the ones with the most airplay at the moment on Mix 96.9 (ain?t it sad they?re the only local station which realises there?s Rock’N’Roll with a large audience for it – and it?s enjoyed by black Bajans as much as white? Fishbone and In Living Kolour are two black-rock groups, the former’s UK and the latter?s U.S. but what do they know, eh?), I see ?Firefly? as the next hit, it is rather Oasis-like?

The duo just returned from Denmark, Norway and Sweden with a brief stop-over in England, as they get ready to start flying high once again!

It’s rather amazing to see how prophetic I was about Firefly, as Jennifer Love Hewitt‘s production team loved it too, here’s some more history on this fascinating group – August 2004: Kite releases self-produced and engineered debut album ‘Up In The Air‘, and performs 95% of the instruments on it.

April 2005: Kite is selected out of 5000 bands to perform at the Florida Music Festival in Orlando. Kite was the only band outside of North America selected to perform at this event. Kite attracted major music labels and industry personnel and subsequently signed a publishing contract with Los Angeles-based RipTide Music. RipTide Music is an LA-based publishing company that finds placements for songs in movie soundtracks, TV shows, video games, TV commercials etc.

September 2005: “Firefly” (an original Kite song) features on an episode of Emmy Award winning series ‘The Ghost Whisperer‘, broadcast on US Television network CBS in their prime time slot on Friday, 30th September 2005. The series also has a world wide viewership. My conundrum is this, if they try so hard and reap success over and away – why do they gain no honour in their own homeland? Case in point? At Jumbies At The Gap, over last weekend, they were stuck in a corner (which JJ noted was so hot, they swore they were in Biafra and said they ended up there as Management walked around with a thermometer to see where was hottest, then dropped them there) and a small tent – Masala who was due to play later on had a whole inside stage for themselves…

They did do some covers like Oasis’ Wonderwall and Breakfast At Tiffany’s… JJ’s banter between songs was funny, like when doing Crazy Li’l Thing Called Love they touched on Brian May’s astronomy degree; or David Gray’s Babylon when he mortgaged his house then once he had a hit and was real damn successful, bought the label that forced him to take such a measure and fired all the managers! Kite also gave the audience a touch of their new album Thirteen Degrees North (a play on Barbados’ geographic location) – the full review of their new disc and their revised website as designed by local company vividview is due here very shortly!

I will never forget the female visitor who was dancing to “Ride On“ as if she was hopping through hot coals! Just as Kite was getting into a lusty rendition of the Fab Four‘s “Get By With a Little Help From My Friends” – the audience was about to sing and clap along when the weather went weird – and JJ dared the skies by referring to it as a passing shower and then the clouds really went to work!

When rain fell, Brian and JJ refused to continue as water spewed into their monitor speaker and they quite naturally had a concern of being electrocuted! Sadly it brought a premature end to a great night of fun with Kite, the location of Jumbies is nice and the staff are friendly – parking’s the only concern but if you’re an old hand with St Lawrence Gap then you know how to wrangle your way thru it all.

My view is that Kite should have been given stage rights same as Masala or at least a bigger and more waterproof tent? If you check MySpace for kitesound then you get a running menu of where they perform – so apart from Jumbies, there’s Elbow Room in Holetown on Saturdays. Still to come? A scrutiny of 13 Degrees North and the revamped website – can they do more? Or is it just right? Stay tuned!