Campers attending the Aquarius Swim Camp at Browne?s Beach, Bay Street had a surprise visitor not so long ago when U.S Ambassador to Barbados and the Eastern Caribbean Mary Ourisman passed through.

Ambassador Ourisman read about the swim camp, which caters to children with and without special needs, in a local magazine. An avid lover of the sea, the Ambassador was eager to visit with the coordinator, veteran swim coach Michael Young, and the 50 or so tiny tots and teenagers in his charge for the seven-week camp. 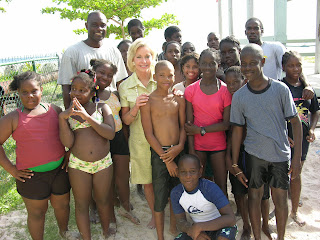 The U.S envoy lauded Mr. Young for the work he has been doing with children over the years in educating them about the marine environment and the importance of taking care of it.

Ambassador Ourisman also praised the campers for having an awareness of the importance of protecting their environment.

The campers are taught a number of water sports including swimming, kayaking, scuba diving and snorkeling. They are also exposed to personal development sessions, sign language, camping, first aid and tours of popular locations around the island.