I love how blogs and e-mails have opened the rights of people to air grouses at a level never before comprehended, sometimes it’s very dangerous and other times it’s downright hilarious as in this (Not Necessarily The) News “Report“ that came in a fwd’d e-mail from one of my cousins –

It was reported today, the United States has captured four Caribbean people suspected of plotting terrorist acts against the US. Four old men were arrested and charged with the heinous crimes. The men hail from Guyana and Trinidad but since no one knew which island was Guyana, the FBI concluded it must be part of Trinidad.

After careful investigation, the US authorities revealed that Trinidad was the new Axis of Bacchanal.

US President Dasheen Bush authorized fifty thousand troops to begin a load of Strategic Halt In Terrorism campaign against Trinidad but on discovery of the actual size of the twin island country, forty-nine thousand troops were forced to wait in Barbados, Grenada, Martinique, St Kitts, St Vincent, Antigua, St Lucia, Dominica and Jamaica while the first thousand landed in Trinidad.

It became apparent to the US troops immediately upon arrival that Trinidad and Tobago was indeed expecting an invasion. The troops arrived on what is called “J’ouvert Morning” – a fundamentalist movement on the island. Streets were empty and all focus was on the two areas of worship – Port of Spain and San Fernando.

At Piarco – the island’s only airport, there was a lengthy delay due to the fact that the entire personnel was in the staffroom viewing something called ‘Parade of Bands“. Later, the troops were asked to wait on the tarmac while a rather disgruntled customs officer spoke at length to another customs officer about a covert plot called “mehwifehorningmewidamannamesooklal“.

On the local television channel a group calling themselves “Tribe” waved vicious and obviously religiously motivated banners in plain view of foreign television cameras. Several women were seen to remove their masks and other clothing. Only the faces were carefully photographed by our imbedded See Nen Nen reporters, to be matched against known dissident profiles.

Top CIA officials have confirmed these banners are part of the terrorist underground language in Trinidad. In fact, most of the natives of this South American island speak a version of Arabic predicated on the word “eh“. When asked to comment on the grievous situation facing the country, most interviewed replied “eh“.

Steeped resistance was met in various parts of the capital of Port of Spain. Once troops were able to navigate a treacherous land pass called Lady Young Road, they were met by a riotous band of rebels calling themselves “Island People” – a known group of dissidents. US troops were unable to subdue this elite group of highly trained militia.

The troops were sprayed with a toxic liquid locally made called “babash“. It caused disorientation and almost an entire regiment was infected.

Another unfamiliar weapon was called “wine” – but not the alcohol kind. This was a particularly devious weapon favoured by the female militia and was wrought on each of the US troops by two females at once while the male militia shouted – and I quote – “YOU GO KILL DE MAN WID DAT WINE!” – obviously more death code.

Other of the US troops stumbled upon what seems to be the noocoola region behind the unrest in this previously unknown island. It has come to this reporter’s attention that troops arrived in an area called La Vanty. Several troops were lost in La Vanty. Troops would head into the alleys and hilly streets and not return. It is assumed they have been captured by the La Vantians. Frightening shouts of “PLATOW! AH KETCH ONE!” could be heard intermittently throughout the blood thirsty area. More troops were lost in a maze known as Diamond Vale. No bodies have yet been recovered. Other troops were captured. A group calling themselves ‘Borokeets” have taken responsibility.

The insurgents there are a force to be reckoned with. One such trained sniper was overheard reporting to his superiors on the Digicel military based cellphone that he had “Flimmed de whole ting!” Our expert sources at the CIA revealed that ‘flimming‘ is a highly developed form of warfare taught at terrorist training camps all over Trinidad.

It was deduced ‘ting‘ is similar to ‘ent‘ and are both noun and verb and possibly diphthong.

Other Weapons of Mas Destruction were found scattered around the island after two days of intense fighting ended on Ash Wednesday.

President Dasheen Bush has issued a stern warning to the Prime Minister of Trinidad and Tobago that further resistance will not be tolerated. The Prime Minister was unavailable for comment. Sources say he was last seen shopping in Flatbush, New York. 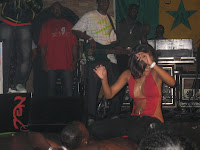 The US also revealed that an undercover agent named Akon had been planted in Trinidad several weeks prior and infiltrated a hideout called Zen. There, Agent Akon was able to thoroughly examine the youth movement of terrorism closely. His findings are documented in the SorryMyArse Report. This hideout was also the scene at which fundamentalist leader LookAbu Bu Dey Montano was caught on tape training other youths in the art of “Jumbie”. One such training session ended in serious injury to a cadet. Montano has taken his training techniques to Toronto and New York where terrorist cells are said to exist. It is reported a large meeting will be held in Toronto under the code name Caribanana.

It is not known at present how long it will take the US to get to the bottom of this serious upheaval. The four men arrested are awaiting sentencing after their Milo and nap. Investigators had been following these men for several months. Informants were planted at many of their meetings, cleverly disguised as “All Fours Night“, apparently another code developed by these masterminds.

On the night of their arrest they were found with all the supplies for a terrorist attack – english potato, corn, ground provisions, saltmeat and coconut milk. They defiantly claimed this to be a fatal concoction known as ‘pelau‘.

We will keep you posted as things develop in Trinidad. The entire Caribbean region is at risk of being invaded if things are not settled there. US Secretary of State Peas N Rice has agreed to meet with a contingent of ambassadors from the island led by Trinidad’s Protocol Minister Destra Garcia and Minister of Titular Affairs, Denise Belfon.

We will have that outcome for you as soon as the meetings are concluded.

This is Queen Macoomeh for See Nen Nen News