Got this one from a former colleague of mine (no, not Betty – nor the source for when I got the juicy thing on BBC 2), and this one is really a prickly issue… 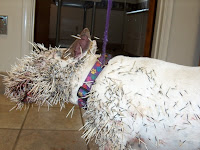 So, if you are happening to travel and on your itinerary you have to visit rural areas of California then you may happen to see a strange creature that is a Porcupine stripped to nothing but boxer shorts? There is a reason for it, a female Bull Terrier (they call her a Pit Bull, but she is not the Staffordshire Pit Bull many folk here, in the USA and UK are terrified of – this is the kind of Bull Terrier seen in Incredible Journey) decided the porcupine must not cross her path so the porc unleashed its arsenal, nearly all of it or so it appears –

A Pitbull decide he would battle a Porcupine in back of his house in Southern California. But being both brave and stupid, he ultimately learned the hard way that he can’t always win, no matter how tough you are… The veterinarian removed 1,347 quills and the pit-bull survived!

Now you see that is why I verify before I run it, if you notice they have changed the dog’s gender, I learned this was wrong when I Googled it and I saw it on many other blogs but listed as a HER- but best of all this was verified by Snopes, and here’s their version –

Inca apparently did not know when to quit when she encountered the porcupine on Victoria Day, May 23rd. These are the pictures the vet sent before the long (and expensive) procedure to remove the quills. She had thousands of quills, and her tongue was so covered, she could not close her mouth. 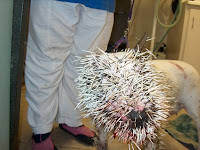 It was pretty scary at first. She is doing okay now, but looks like a World War III survivor as they had to cut some out in places, stitched between her toes, and many quills bled on removal.

Here are still quills buried in her, but they should work their way out over time (I pulled four more today). She is on antibiotics and pain meds and thankfully is doing quite well. Maybe she was showing off for her new boyfriend, Rocky, I don’t know; but he only got a few in him, which friends were able to remove. Ike, of course, had better sense.
I sure hope that the Queen of Quills has learned her lesson…