Thunderous applause accompanied by shouts of bravo and encore filled the Sir Cecil Jacobs Auditorium of the Eastern Caribbean Central Bank recently, as the sounds of Bach, Mozart, Puccini among others enraptured an appreciative audience.

British Soprano Allison Buchanan serenaded the audience with an outstanding performance of ?O Mio Babbino Caro? from an act in Gianni Schicchi, before going on to perform favourites such as ?Summertime? from Porgy and Bess, ?Anybody Here? and ?Ride on King Jesus.? 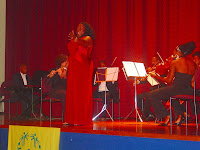 The West Village Quartet based in New York also appeared in concert and soothed patrons with ?Canon? by Pachelbel, ?The Entertainer? by Joplin as well as ?Interludium in Modo Antico? by Glazunov.

The show was a fund raising event for Special Olympics. Chairman of the Board Lloyd Lazar said it was a historic moment as there has never been such a distinguished band of professionals featured in a classical concert in the Federation. 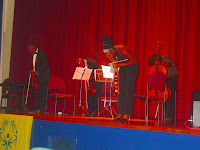 SKNIS got the impressions of a few persons during intermission who all hailed the performances. One man singled out the sound of the violins describing it as calming. A resident of Nevis, who was born in Jamaica, said she was excited to see this type of entertainment in St. Kitts. She noted that she regularly attended such performances in Jamaica and is anxious to see more of this locally.

Vondez Phipps, a youth activist, said he attended the concert with an open mind being unfamiliar with this type of cultural presentation. By halftime, he was a convert having found a deep appreciation for the art form.

The evening climaxed when the West Village Quartet and Ms. Buchanan collaborated to perform the final three songs together prompting standing ovations. 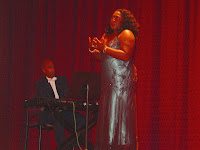 Part of the proceeds from the event will benefit the Special Olympics effort to represent the Federation at the World Games in China. The Caines? family played an integral role in organizing the concert and was thanked by Mr. Lazar for their partnership.