Digicel and the West Indies Cricket Board, announced they’ll enter a new extended partnership until September 2012 that’ll provide the support that West Indies cricket needs in order to seek to re-establish their position as a leading cricketing giant once again.

The agreement guarantees yearly sponsorship payments of at least US $4 million and includes the continuation of the Digicel player incentive fund and a comprehensive youth programme.

At the same time, Digicel will continue its own programme of development initiatives such as the Digicel Cricket Scholarship and Training Clinics and has expressed its willingness to be part of the proposed Academy for West Indies cricket.

The new contract, which comes into effect ahead of the Windies away tour to South Africa in October 2007, offers enhanced opportunities for the WICB to attract more corporate sponsorship of West Indies cricket.

These include branding rights at test match grounds and sponsorship rights to any tri-nation series the WICB might develop.

According to Kevin White, Digicel Group?s Chief Operations Officer, ?As a company that was born in the Caribbean, Digicel sees its involvement in West Indies Cricket as a way to support the major passions of our customers and as long as this passion continues then we are committed to continue to support the game. Just as our approach to our core business, we will continually raise the bar on our support and exceed what has gone before?. 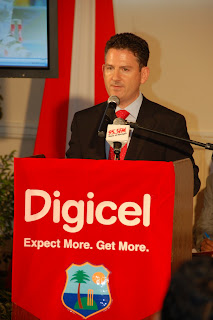 Since 2004 Digicel?s aim has been to go beyond this investment to work with the WICB and people of Caribbean to genuinely help cricket.

During the recently concluded Windies tour of England, Digicel funded a specialist fielding coach and team psychologist as well as announced the Digicel Cricket Scholarship programme which allowed first recipient Jerome Taylor the opportunity to play English Country cricket with Leicestershire for the remainder of the English season.