Andre Woodvine really should have the last name of Reed, not only as a more Bajan surname but I have seen him all his life with a sax reed near his hands mouth or both at some point when I do lay eyes on the fellow Harrisonian, LOL!

His debut cd was Voyager back in 1995 and was a great showcase to emphasise a potential career that now Barbadian film-making is taking off that he can examine – creating and editing soundtracks! I don’t just mean the theme for the C&W Sports World, we mean a full-length cinematic feature!

“Some Assembly Required” (SAR) is Andre Woodvine‘s fourth disk and is his most ambitious in the sense it is a test to deliver a quality product without having to leave home and source a studio, he has succeeded in every sense even if his wife Louise was annoyed about her ballerina outfits during reconstruction to add the new home-base (all four cd’s can be purchased online at his own personal website) – 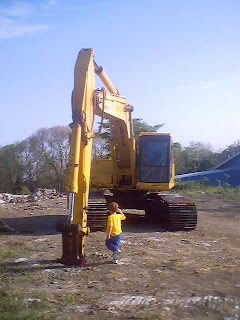 “‘Machine Code‘ was an experiment with odd time signatures, and was influenced by reading good science fiction and listening to Pat Metheny – something I recommend highly. Count 7, 7 3, 3, 2 when you listen to the song and then you get the idea…

“The tone of Chemical Blues was inspired by the words of General Amir Al-Saadi who, while surrendering to Coalition Forces said, “I tell you for history, we have nothing.” If you remember, Mr Al-Saadi was the Iraqi Government’s spokesman on Chemical Weapons and consistently denied there were any left in Iraq. What has the Coalition achieved in Iraq? Was it worth the slaughter of so many thousands of innocents?”

Andre concludes his disk’s foreword by seeking to reconcile with hope for the future and seeing it rise in his own son who is on the album cover. Andre will be quite busy for the rest of the year with numerous gigs, including some at the popular West Coast establishment, The Sandpiper Inn!