From now until August at Barbados’ historic Atlantis Hotel, on the wind-swept east coast, are the intriguing turns of Margaret Rodriguez? Bajan view in watercolour.

The proud colours of the chattel house; the nostalgic views of time passed; our cricket heritage and the beauty of our tropical flowers, all given that special touch by Margaret to bring them to life.

A Trinidadian by birth but Bajan in her heart, Margaret Rodriguez moved to Barbados in 1986, and began painting in earnest from 1994 when she joined a painting group for relaxation and de-stressing. Ten years later she has become one of Barbados? better known watercolour artists. Though her art is present in many of the Art Galleries, Margaret has not exhibited in quite a while, making this Atlantis Exhibit a unique experience not to be missed. 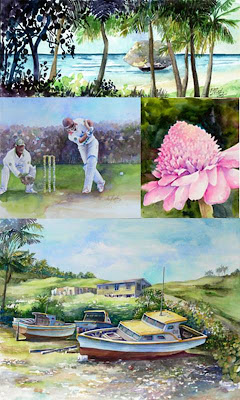 Established in 1884, The Atlantis Hotel stands at the edge of Tent Bay, facing the Atlantic Ocean in St Joseph, one of the most photographed views of Barbados. This Hotel is a Barbadian institution, famous for its ABC?s ? All Bajan Cuisine, and in particular their legendary Sunday and Wednesday lunch buffets.