Efforts are continuing to make Grenada’s Port Louis Marina one of the best in the world. A major part of this project is making the Lagoon area more attractive. 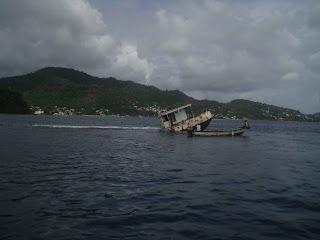 The latest of the wrecks to be removed is the Hilda. Once a cargo boat, sailing the Caribbean Sea, Hilda became a casualty of time and Hurricane Ivan.

In an effort to create an environmentally friendly and safe marina, Port Louis work crews have spent 12 weeks patching and welding the vessel in order to be able to float it and remove the Hilda from the area where it was wrecked.

The Hilda was finally towed out to sea this week and was sunk in open waters outside of the village of Molinierre. The Hilda will now add to the many dive sites off of Grenada‘s coast.

Marine experts working with Port Louis officials on the removal of Hilda say they expect the boat to encourage the growth of coral and form a reef. 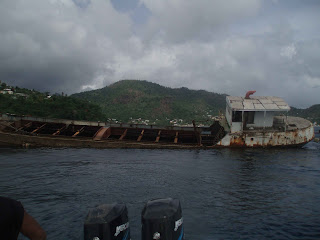 Marina & Village Manager at Port Louis, Danny Donelan, explained the significance of the careful removal of The Hilda and pointed to the high regard the Port Louis team has for the environment.

Donelan stated millions have been spent to clean up the marina – not only because they want the best and most beautiful marina in the world, but because this marina must enhance the environment and not degrade it.